largest Earthquake of the 20th century

The 1960 Chile earthquake was the largest earthquake of the 20th Century. It struck off the coast of South Central Chile on May 22, 1960. Since that earthquake Chile was struck on February 27, 2010 with an 8.8 earthquake that caused the Earth to spin slightly faster. 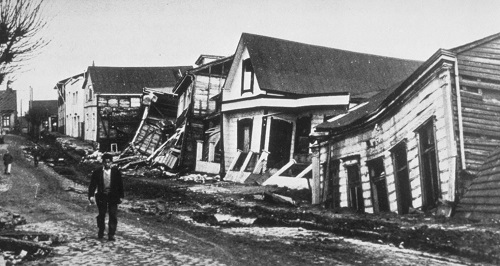 The 1960 earthquake in Chile was the largest earthquake ever recorded by seismographs. It was a 9.5 magnitude earthquake off the coast of Chile. The Nazca Plate, an oceanic plate, is subducting beneath the North American Plate, a continental plate.

Tsunamis generated by the earthquake

Tsunami waves were 30 m high
Huge tsunami waves struck the coast 10 to 15 minutes after the major earthquake. They were approximately 30 m ( 75 feet) high and killed many people along the coastline.

People fleeing Chiloe Island tried to escape
On Chiloe Island, in southern Chile, people ran to their boats to escape the earthquake when the shaking started. Tsunami waves triggered by the earthquake and moving toward the shore destroyed all the boats filled with people as they were fleeing the area.

effects on the People

Two million people left homeless
Approximately two million people were left homeless. There has been no accurate accounting of the number of lives lost during the earthquake and subsequent tsunami. It is believed though that most of the loss of life were caused by the tsunamis as they swamped boats and came ashore in the coastal areas.