Fascinating Facts about the oceans 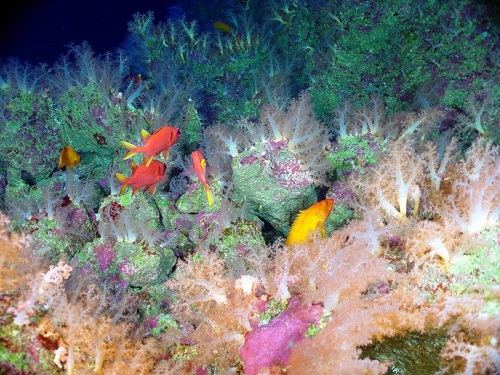 Diamante Volcano a seamount in the Pacific Ocean  NOAA

Three oceanographers went down in a mini-submarine in 1977 to study a divergent boundary. They wanted to find a volcanic vent located on the seafloor. They found the vent and an entire new ecosystem of animals living around Black Smokers.

Black Smokers are chimneys of chemicals that form on the seafloor above the vent. Microbes turn the chemicals coming out of the vent into energy. Over 600 new species have been found around the vents including giant tube worms that feed off the energy produced by the microbes. More facts about the oceans are being discovered by scientists in mini-submarines each year.

New facts about deep-sea coral reefs are being discovered. Just a few years ago it was thought that stony corals could not live without sunlight. The algae that creates 90% of the coral’s food requires sunlight in warm tropical waters. Deep-sea stony corals feed on food brought to them by the currents in the oceans.

Deep-sea corals live between 45 m and 3000 m below the surface of the ocean in all the oceans. They grow slowly on seamounts, continental slopes, underwater canyons and the seafloor. .

Each year deep-sea corals grow annual rings just like trees. Scientist determine the age of the animals by their growth rings. One colony of deep-sea corals has been growing in an area for over 4000 years. The oldest known animal on Earth was a black coral. Scientists dated its age at over 4,250 years old.

The Oceans includes chapter on  whales, sharks, giant clams and tsunamis. New facts about the oceans that have been discovered recently are also included in this book.     Myrna

Diving to the Deepest points in the the Oceans

Challenger Deep is the deepest known point in all the oceans. The first manned descent was made by Jacques Piccard and Lt Don Walsh on January 23, 1960. They stayed just 20 minutes on the seafloor because an outer window cracked.

Victor Vescovo, dove to the deepest points in all five oceans. He completed his epic adventure in August 2019. The Discovery Channel will air a five-part documentary on the trips. New facts about the oceans will be included in this documentary series.

These are the dates each dive took place:

May 2019 - Challenger Deep in the Pacific Ocean

More facts about the oceans

Are rogue waves a myth?   Rogue waves were believed to be tall tales told by sailors for centuries during shore leave. Today instruments have detected these waves and a film crew took a movie of one striking a fish boat.

Ghost crabs live on tropical beaches   These tiny crustaceans begin life as larvae floating in the ocean. They come ashore to live their adult life on the beaches where they build elaborate burrows.

Unknown life around black smokers   Black Smokers are hydrothermal vents that were discovered by scientists in 1977. The animals living around the vents do not need sunlight to survive

Our Blue Planet   The Oceans cover 70% of the Earth. We are still learning about many of the animals and plants that live in the oceans.

Crustal plates pulling apart create rift valleys   Rift valleys would look like seams on a baseball from space if all the water on our planet suddenly disappeared.