Rift valleys are not caused by erosion but are created by tectonic activity. Grabens are another name for these valleys. Today geologists use the term graben primarily to describe valleys on the continents. The valleys form when continental crust is pulling apart allowing the land to drop down between parallel faults. These valleys also form when oceanic plates are moving apart forming a divergent boundary. 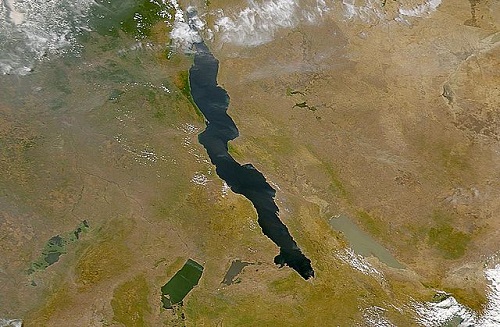 Iceland is in a unique area on our planet where geologists study the global mid-ocean ridges and visitors can walk through a valley on the Mid-Atlantic Ridge. The valleys form a boundary between the Eurasian Plate and the North American Plate. The Mid-Atlantic Ridge runs down the center of the Atlantic Ocean.

Tectonic forces create rift valleys on the continents when a crustal plate is pulled from two different directions and the crust thins. Parallel faults are created as the crusts is pulled apart and a central section drops downward forming a graben. As the tectonic forces continue to pull the crust apart the rift valley increases in size until it becomes a basin. The basin continues to drop downward as the rift widens.

The Oceans is a fascinating book that contains a lesson, quiz and activity. The book is 168 pages long filled with fascinating information about the oceans.  Lessons include  The World's Oceans, Tide Pools, The Drifters and Marine Mammals.  Myrna Martin

Lake Baikal and Lake Tanganyika are two lakes that were once rift valleys that became so deep they formed a lake. Lake Baikal is the deepest lake on Earth. It also contains the greatest volume of fresh water on our planet. Lake Tanganyika is the second largest lake and contains the second largest volume of fresh water on Earth. Both of these lakes were created by active rifting of a continent and the rifting continues at this time.

Lake Baikal is located in Siberia on the Baikal Rift Zone. Lake Tanganyika is located on the westernmost arm of the East African Rift Zone. If these two rift zones continue they will break apart the crustal plates they are located on and will create new plates. Sea water will flood the rift valleys and they will eventually become seas like the Red Sea. 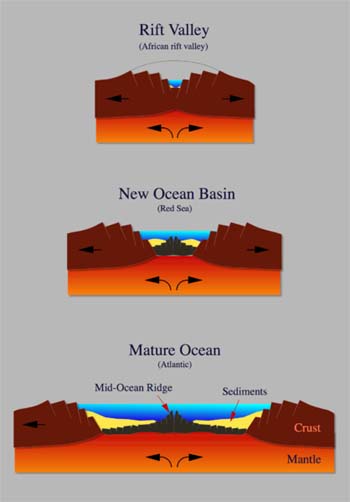 The global mid-ocean ridges are found in all the oceans on Earth. The center of these mid-ocean ridges are rift valleys that separate lie between the two separating plates. As the plates move apart magma from the upper mantle flows out onto the ocean floor in the valleys creating the newest crust on the planet. The valleys are at the summit of a bulge in the floor of the ocean that gradually drops down as it moves away from the ridges when two plates are separating.