Sputnik 1
The Space Age began on October 4, 1957 when the Russians launched Sputnik 1 into orbit. The basketball sized artificial satellite circled the Earth in 98 minutes. The satellite transmitted information until October 26 when its batteries ran out after completing 326 orbits. Sputnik 1 orbited the Earth for three months and circled the Earth 1,440 during that period before it crashed back to Earth. 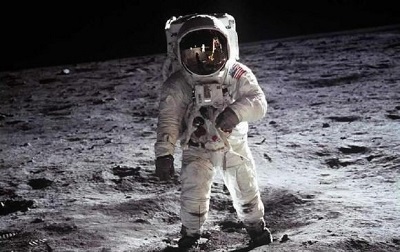 Buzz Aldrin walking on the Moon during Apollo 11 Moon Mission

Walking on the Moon

Apollo 11 Space Mission
Twelve years later on July 20, 1969 Neil Armstrong and Buzz Aldrin flew down to the surface of the Moon in the Eagle, a lunar module (LM). Neil Armstrong reported back that the Eagle had landed to NASA. Michael Collins in the command module continued to circle the Moon while Armstrong and Aldrin were on the Moon.

Armstrong and Aldrin Moon walk
Neil Armstrong descended first followed by Buzz Aldrin. During the two hours and fifteen minutes they walked on the Moon they collected samples of the soil, started a solar wind experiment, took pictures of the landscape. They returned to the LM and slept before returning to the Command Module.

The main construction of the International Space Station was completed between 1998 and 2011. The space station has been continuously occupied by a crew and scientists since November 2, 2000. As of October 28, 2019, there have been 239 people from 19 countries that have visited the Space Station.

The International Space Station is a multinational endeavor.  An international partnership of space agencies provides and operates the the ISS. The countries that provide the principal space agencies that operate the ISS are the United States, Russia,  Japan,  Canada, and Europe,

The Space Station travels at a speed of 5 miles per second around the Earth. People on board the Space Station in 24 hours can see 16 sunrises and sunsets. You can see the space station flying overhead at dawn or dusk.

Find out more about space in this fascinating book. The     Myrna 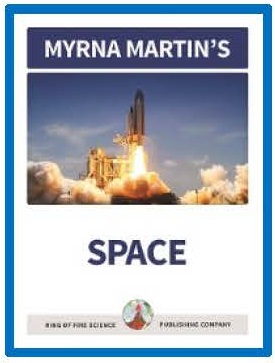 Early problems with the telescope
Hubble Space Telescope is in orbit around the Earth. It was launched into space in 1990. At first the telescope had blurry images because the lens had not been ground correctly. A servicing mission in 1993 corrected the problem. The correction to the lens is like putting glasses on a person. Since the repairs in 1993 the pictures sent back from the telescope have been spectacular.

The Pillars of Creation
The Pillars of Creation are one of the most famous pictures taken by the Hubble Space Telescope. The eerie, dark pillar-like structures are columns of cool interstellar hydrogen gas and dust that are incubators of new stars. The pillars are part of the Eagle Nebula (M16). Ultraviolet light is slowly eroding away the pillars.

Jupiter
The Great Red Spot on Jupiter was first observed by Giovani Cassini in 1665. The Great Red Spot is a vast storm, spinning like a cyclone rotating in a counterclockwise direction. Winds inside the storm reach 270 mph.

Meteorologists have been studying the Great Red Spot because they believe the information they obtain can be applied to the atmosphere over the oceans our planet.

The energy from sunlight is harnessed by plants through the process of photosynthesis. Photosynthesis of sunlight by plants supports almost all life on Earth.

Unknown ecosystem discovered in 1977
Prior to 1977 it was believed that all life depended on the Sun. During a trip in 1977 to observe a spreading ridge on the seafloor scientists discovered a complete ecosystem that lived around hydrothermal vents. The ecosystem used energy from thermal vents and were not dependent on sunlight.

What are stars
Stars are large balls of hydrogen and helium with a sprinkling of other elements all in a gaseous form. Gravity pulls matter toward the center of a star as nuclear fusion causes the hydrogen to fuse into helium. The heat from the fusion creates super-heated gases that are forced toward the surface.

A balance forms between the outward and inward pressure of the gases as millions of tons of hydrogen are fused into helium every second. The fusion of hydrogen into helium in the core of a star provides the energy that creates light and other forms of energy.

Galaxies
Astronomers have found that galaxies are enormous collections of stars, gas, and dust held together by gravity.

Galaxies range in size from dwarf galaxies with as few as ten million stars to giant galaxies with over a trillion stars. Astronomers estimate there may be over one hundred billion major galaxies in the observable universe.

Four types of galaxies
Edwin Hubble discovered that there were galaxies beyond the Milky Way. He divided the galaxies into elliptical, spiral and irregular galaxies. Today scientists include barred spiral galaxies as a fourth major type of galaxy because about 50% of the spiral galaxies in the universe have a bar.

The Milky Way, our local galaxy, is a barred spiral galaxy. The nucleus is hidden from our view by thick clouds of ash and dust. The Galaxy is approximately 100,000 light years in diameter and estimated to contain two billion stars. The Sun is in one of the spiral arms of the galaxy 30,000 light years from the central bulge.