Facts about the Milky way 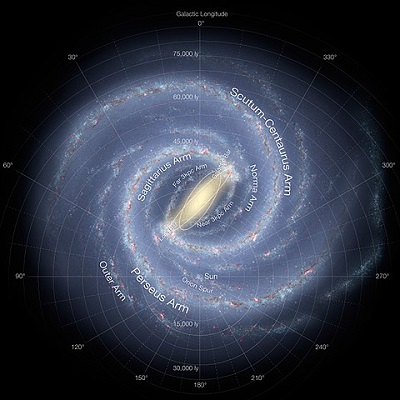 Viewing the Milky Way from earth

Viewing our galaxy
The Milky Way is our home galaxy. You can see part of the Milky Way on a clear night from Earth. Look for a thick band of stars stretching across the night sky. Ancient people looking at the heavens thought the Milky Way was a path to heaven, a stream and even milk.

Location of the Solar System in the Milky Way
Our Solar System sits on the outer edges of one of the spiral arms of our galaxy. To find out Sun look at the bar in the center of the Galaxy. Look below it and you will see the Sun near the words Orion Spur.  Our Solar System is located in a region between two arms called the Orion-Cygnus arm.

Mapping the night sky using 88 constellation
Today astronomers divide the sky into eighty-eight constellations with defined boundaries. Constellations are recognizable patterns that were named long ago after mythological figures.

There are a number of star charts that are free and others that can be purchased on the internet.  See how many of these constellations you can see on a clear night.

People believed all the star were in the Milky Way
Prior to 1919 most people believed that all the stars in the universe were in the Milky Way Galaxy. Edwin Hubble began to study Cepheid variables, a type of star that pulsates, in nebulae using a large new telescope at the Mount Wilson Observatory. Nebulae at this time was used to describe any astronomical areas, including galaxies, that were spread out over a large area. Inside the nebulae were Cepheid variables he used to determine their distance from Earth.

Discovering new galaxies
Hubble discovered these stars were not part of the Milky Way Galaxy. Instead, the nebulae he was studying were separate spiral galaxies beyond the Milky Way. He published his finding in 1924 in the New York Times and presented his finding at a meeting of astronomers in 1925. His findings were not published until 1929 in a scientific journal that fundamentally changed the way astronomers viewed the universe.

What we know about galaxies
Astronomers have found that galaxies are enormous collections of stars, gas and dust held together by gravity. The typical galaxy contains one hundred billion stars and is separated from other galaxies by vast regions of nearly empty space. Astronomers now estimate that there are more than one hundred billion major galaxies in the observable universe. Galaxies range in size from dwarf galaxies with as few as ten million stars to giant galaxies with over a trillion stars.

It was 1919 when Hubble discovered that the Milky Way was not the only galaxy in the universe. Sputnik 1 to successfully orbit the Earth. Twelve men have walked on the Moon. Mars rovers have discovered new information about the planet. Find out much more about the exploration of space in my book.  Every chapter has information, quiz and an activity related to the topic in each chapter. Myrna Martin

Today astronomers have added the barred spiral galaxy as a major galaxy because about 50% of spiral galaxies are barred.

The disk is very prominent in most spiral galaxies and is luminous because it contains so many young stars. Young stars move around the central core of the galaxy in small groups because they have recently formed in a nebula. There are up to one hundred young stars in these small groups.

Open clusters of stars
Open clusters contain between one hundred and one thousand stars. The stars are bound together by gravitational forces more tightly than the small groups of stars forming in a nebula.

Birth of the Milky Way 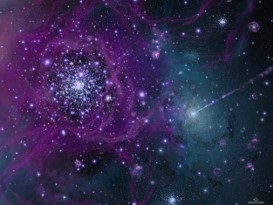 The picture is an artist’s concept of what the Milky Way looked like 12.7 billion years ago. At this time the arms had not formed. Hundreds of globular clusters of stars came together during the formation of the Milky Way. Astronomers using the Hubble Telescope to find white dwarfs that are the oldest stars to calculate the ages of globular clusters of stars for this picture.  NASA/ESA and Adolf Schaller

Astronomers believe this central structure could have been created when two galaxies collided. The central bar affects the movement of the stars, gases, and the spiral arms.

Central bulge of the milky Way

What the bulge contains
The central bulge is dense and filled with so much dust that no one can see across our galaxy to the other side. The central bulge cannot be studied with optical telescopes because dust, gas and stars obstruct its view.

Special telescopes study the bulge
Radio telescopes and X-ray telescopes are used to study the central bulge of the Milky Way. The central bulge contains the highest density of stars. It may contain some young stars but most of the population of stars found in this region are very old. The Galactic Center is a supermassive black hole that rotates.

Stars in the Milky Way

Stars are large balls of hydrogen and helium with a sprinkling of other elements all in a gaseous form. Gravity pulls matter toward the center of a star as nuclear fusion causes the hydrogen to fuse into helium. The heat from the fusion creates super-heated gases that are forced toward the surface.

A balance forms between the outward and inward pressure of the gases as millions of tons of hydrogen are fused into helium every second. The fusion of hydrogen into helium in the core of a star provides the energy that creates light and other forms of energy in the electromagnetic spectrum.

Our Sun is a dwarf yellow star

Halo of spiral galaxies
The halo of a spiral galaxy is roughly circular in shape and contains old stars and globular clusters of stars. Ninety percent of these stars are within 100,000 light years of the Galactic Center. The halo also contains dark matter that is invisible but can be measured. The halo of the Milky Way is estimated to be over 130,000 light years across.

The Local Group
The Milky Way and Andromeda Galaxies are part of a local group of spiral galaxies. There are 50 closely bound giant galaxies in this group. The local group forms a dumbbell shape. One side of the dumbbell is the Milky Way and its satellite galaxies and on the other side of the dumbbell is the Andromeda Galaxy and its satellites.