What is the Rock Cycle?

The rock cycle consists of igneous rocks, sedimentary rocks and metamorphic rocks. These groups of rocks are constantly changing from one group into another. The rocks in each of these families are changing due to tectonic plate movement as crustal plates collide, move apart or slip past each other. 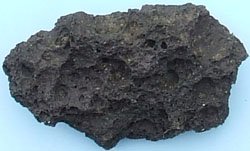 Basalt rock that formed in the upper mantle, Myrna Martin

Igneous rocks
Igneous Rocks are a major group of rocks. All igneous rocks develop when molten rock cools and hardens. Find out about these igneous rocks in the links below that form when a volcano erupts: pyroclastic rocks, aa lava, welded tuff, ignimbrite, pyroclastic material, pahoehoe lava and basalt rocks.

Tephra
All rocks that are blown out of a volcano are tephra rocks. Gases in the molten rock expand as the molten rock nears the Earth's surface. The expanding gases burst out of the vent of the volcano creating ash, lapilli, and lava bombs.

Lava flows
Lava flows are molten rock that flows out of the vent of a volcano. It can flow down the slopes of the volcano or form a river of molten rock. All igneous rocks that flow out of a vent are called lava or lava rocks. Pahoehoe is a fluid lava that looks ropy on shield volcanoes. Cooler and less fluid basalt lava is called aa lava. The surface of these flows are rough and hard to walk on. 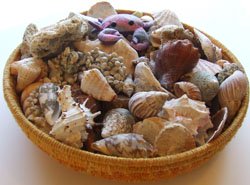 Clastic rocks
Clastic rocks are bits and pieces of rocks that are "glued together" with minerals that crystallize between the individual clasts in clastic rocks. Major groups of these rocks are shale, mudstone, siltstone and conglomerates.

Organic rocks
Organic rocks form when plant and animal remains turn to rock. Coal, that formed in ancient swamps, is the only rock that will burn. Coral reefs were created by tiny coral polyps that used calcite in seawater to create tiny homes where they lived their entire life. Plankton have shells that they use for protection. Chalk is an accumulation of e shells that form layers on the seafloor that turn into stone. 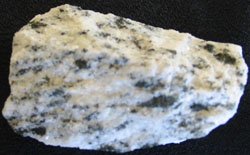 Gneiss rock that is a high-grade metamorphic rocks

More information on the Rock Cycle

Organic Rocks Were Plants And Animals

Limestone Caverns Are Holes In Rocks

What Are Intrusive Rocks?

Salt Domes Have Many Uses

What Is Pyroclastic Material?

What Is Pahoehoe Lava?

Aa Lava Flows Are Rough To Walk On

90% Of All Volcanic Rocks Are Basalt Rocks

What Are Clastic Rocks?