Our kids science newsletter comes out at the first of each month. It is designed for anyone interested in science. These are the features you will find in the newsletter each month.

Question of the Month
Do you know what is the fastest flying insect? (answer at the bottom of the page) 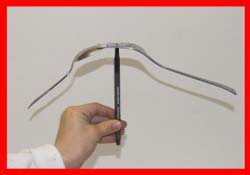 Science Behind the Experiment
The center of gravity of the spoon and fork is below the base of support, which in this activity is the point of the pencil lead or the pencil eraser. The eraser is more stable than the pencil point because it has a larger base of support.

Answer to the question of the month
The dragonfly is the fastest insect. It can fly more than 30 miles per hour. It beats its wings between 25 and 40 times per second as it travels through the air.