PLUTO
Pluto was discovered in 1930 by Clyde Tombaugh an American astronomer because it was thought a planet had disturbed the orbits of Uranus and Neptune. It was considered the ninth planet until 2006 when it was renamed a dwarf planet.

11-year old girl names Pluto
Venetia Burney, an 11-year-old schoolgirl in Oxford, England submitted the name Pluto. She suggested the name became Pluto comes from the name of the god of the Underworld in Roman mythology. Pluto was given this name because it is so far from the Sun that it is in perpetual darkness. 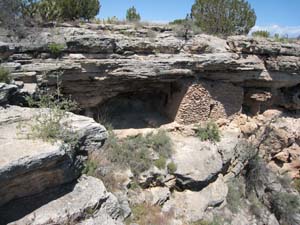 CAVES
Caves are holes in the ground that are usually hollowed out by water. Rainwater trickles through the caves dissolving the minerals in the rocks. The dissolving minerals form pockets, hollows and tunnels usually in the rocks. Caves form when there is adequate precipitation, enough plants and animals producing carbon dioxide and gentle hills that allow the water to drain slowly. The caves in the picture above were sand in sandstone. Native American farmers built homes in the caves and lived there from A.D. 1200 – 1450.

SKELETON
The skeleton is the bones that provide the framework supporting the body and hold the different parts together. There are 206 bones in the adult human body. The baby’s skeleton contains 300 or more bones. Some of these bones fuse (join) together as the baby grows.

GENGHIS KHAN
Genghis Khan was one of the most feared conquerors in history. He was a Mongol leader whose name means “lord of all.”  Genghis Khan led an army of 250,000 men. His army had more than one million horses. The soldiers lived on a diet of smoked sheep meat and dried milk. The Mongol Empire as the largest continuous land empire of all time. 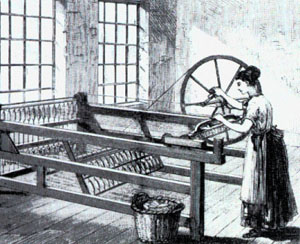 The spinning jenny was created
in 1764 by a Lancashire weaver.

INDUSTRIAL REVOLUTION
The Industrial Revolution began with the invention of machines like the spinning jenny, water wheel, and steam engines that drove machines. The spinning jenny was created in 1764 by a Lancashire weaver. It was designed to help cottage weavers to quickly spin wool or cotton fibers into yarn or thread. His design used lots of spindles at once turned by a single wheel. A seed drill was invented that made holes and planted seeds in them. This process greatly speeded up the planting process for farmers.

STEAM ENGINE
The steam engine was developed in the 1780s by James Watt to drive machines with steam instead of water. The steam engine quickly replaced water as the main source of power in factories. The discovery in 1784 by Henry Cort of a method to remove impurities in cast iron to make wrought iron. Wrought iron became a key material that fueled the Industrial Revolution.