A rare two-toned lobster was caught off the coast of Maine. It is estimated that only 1 in 50 million lobsters will have this coloration. The lobster was half orange and half brown. One person viewing the lobster thought it looked like someone had taken some tape and covered one side and then painted the other side. 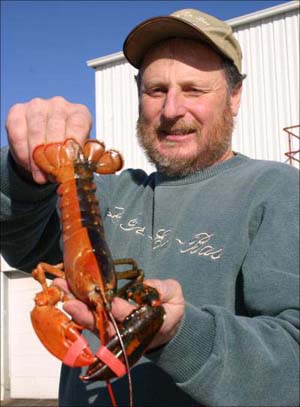 Two-toned lobster with fisherman who caught it.

People are marveling at lobster
One employee of the institute said people visiting the marine center were stopped in their tracks when they saw the lobster. Even people who have seen thousands of lobsters marvel at this one.

Normal colors of lobsters
Lobsters living in the wild are generally greenish-brown in color and only turn red only after being boiled. The institute has seen blue and calico lobsters before but not one like the two-toned colored lobster. Yellow and blue lobsters occasionally turn up along the Maine coast. The rarest of all lobster mutations is the albino.

Maine coast lobsters
Lobster populations are booming along the Maine coast. Last year lobster boats brought ashore a record 126 million pounds of lobster. This is double what they were bringing in just 10 years ago. Let’s hope that if a lobster fisherman finds an albino in their net they will donate it to the institute for everyone to see.