Science Current Events Introduction
In the next few months the positive pole of the sun will suddenly change into a negative pole on the sun. The switch in pole polarity occurs about once every eleven years. Scientists have document the changing of the pole for a while and NASA has a graph showing when it changed in previous years. 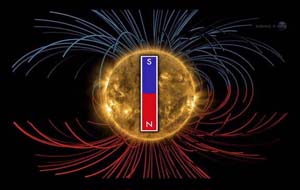 Ripple effect on the solar system
The change has ripple effects throughout the solar system. The sun sends out currents from the sun that form a kind of flat sheet extending billions of kilometers outward from the sun’s equator. When the poles switch ends the sheet becomes wavy. The orbit of Earth as it travels around the sun dips into and out of the current sheet of energy. When the poles reverse the sheet dips creating storm space weather.

11-year solar cycle
The peak of the sun’s 11-year solar cycle is when the sun’s polar magnetic fields weaken and go to zero. The fields emerge with the opposite polarity after this go to zero. The changing of the poles can create stormy space weather that protects us from dangerous cosmic rays coming in from outer space after a supernova explosion.