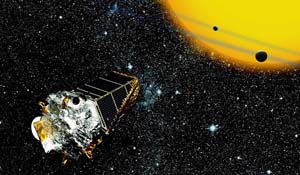 Engineers in July tried to force the faulty wheels into action but they encountered unexpected high friction. Next the engineers tried to direct the telescope at a particular star using the two wheels that are working correctly. The wheels worked perfectly for about six hours and then the telescope unexpectedly shut itself down because of too much friction.

NASA had expected to spend roughly $18 million on space projects this year but with the two wheels broken they may not be allowed to proceed. Scientists are trying to come up with other ideas for the spacecraft at this time. If they do not fund the projects Kepler’s mission is still a resounding success. Scientists have identified over 3,000 exoplanets with the telescope. Prior to Kepler space exploration only 350 planets had been identified.

The next exoplanet mission if it continues to be funded will probably launch in 2017. The spacecraft known as the Transiting Exoplanet Survey Satellite (TESS) will be looking at bright nearby stars.

The $200 million telescope aboard the spacecraft is not as sensitive as the telescope aboard Kepler because scientists are looking at stars in our neighborhood for unknown planets. If they identify planets the new powerful telescope James Webb Space Telescope will be able probe their atmospheres.

Current Events in Earth Science – Space Tourists Virgin Galactic’s Space Ship Two (SS2) flew over the Mojave Desert in California on September 5, 2013. Virgin Galactic’s goal of flying tourists into space in 2014 is much closer after the flight.

Kids Science Newsletter Our FREE science newsletter is published each month during the school year. The newsletter includes current events in science, trivia, and a fun activity. Check out a sample of our newsletter on this page.