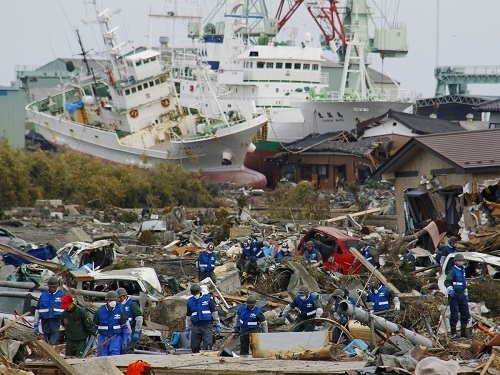 Converging tectonic plates
Plates moving on the surface of the Earth converge in areas all over our planet. If two continental plates converge the result are towering mountain ranges like the Himalayan Mountains. The collision of the Indian Plate and the Eurasian plate smashing together has created  the Himalayan Mountains and the Tibetan Plateau.

Our Earthquake book is packed with fascinating earthquake facts plus an activity in each chapter.  Chapter topics in the book include  Earthquake History, San Andreas Fault, Moment Magnitude Scale and Preparing for Natural Hazards.        Myrna Martin

Boundaries inside the Earth

Moho boundary
Andrija Mohorovicic looking for earthquake facts about the inside of the Earth discovered a boundary that varied depending whether it was below continental plates or oceanic plates. He had discovered the boundary between the crust and the mantle. The boundary was named the Mohorovicic discontinuity often shortened to Moho.

Earth's core
Beno Gutenberg looking for earthquake facts about the Earth below the Moho boundary discovered that S waves stopped at a secondary boundary inside the Earth. He knew these two earthquake facts. S waves only travel through solids and P waves travel through solids, liquids and gases. Gutenberg then knew that inside the Earth was a liquid core that stopped the S waves.

Scientists then discovered earthquake facts they gathered from the seismographs created earthquake zones. These zones of earthquakes showed the boundaries of the crustal plates that are moving on the surface of the Earth.

Largest Earthquake of the 20th Century

Faults move up, down and sideways

Focus & Epicenter of an Earthquake

P Waves Travel Inside the Earth

What are Normal Faults?

What are Megathrust Earthquakes?

What are Earthquake Zones?