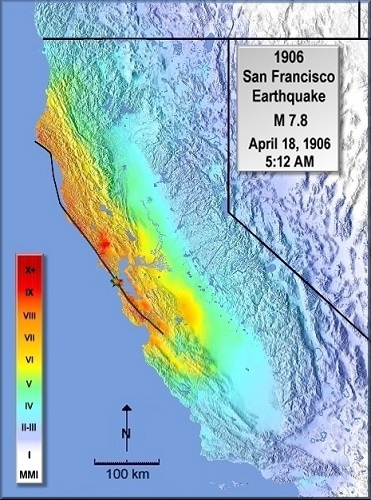 History of the Mercalli Scale

The original Mercalli scale
The first intensity scale was created in 1883 by Giuseppe Mercalli. He was an Italian volcanologist that used only six categories.  He revised his scale in 1902. The revised scale had 10 categories and he expanded his description of each category. It was adopted by the Italian's Department of Meteorology.

Observed damages caused by large earthquakes
The lower divisions of the  scale deals with how the earthquake was felt by people.  The higher numbers on the scale are based on observed structural damage to buildings.

Intensity maps show areas of destruction
The 1904 San Francisco has an estimated 7.9 magnitude on the moment magnitude and had a maximum intensity of XI.  The map shows eleven different intensities.  You can tell on the map where the most destruction occurred and where the earthquake waves were not felt by people in the surrounding areas.

Observations by people
People fill out reports on what happened to them during an earthquake. They are asked if they were awakened by the earthquake, if furniture moved, was there damage to chimneys or to walls in their home.

Questions reflect criteria for intensity
Each of these questions are part of the criteria used to determine the intensity of the earthquake at their location. Engineers also examine structural damage to buildings and other man made structures. They file their reports with the earthquake center.

Generation of an intensity map

Major factors that affect the intensity of an earthquake.