The Haiti earthquake occurred in a seismically active region on January 12, 2010. Haiti and the Dominican Republic were both hit by the earthquake. It is estimated that 250,000 people died as a result of the earthquake. More than 300,000 people were hurt and millions of people lost their homes or had to leave the areas where they had been living. Over 4,000 schools were damaged or destroyed on the island.

When the earthquake struck 70%  of the people in Haiti were living below the poverty line. The poor people of Haiti were especially affected by the earthquake because they had cut many of the trees on the island for firewood and to use when cooking their meals.  The bare hills increased the impact of the earthquake and the human suffering in the country. 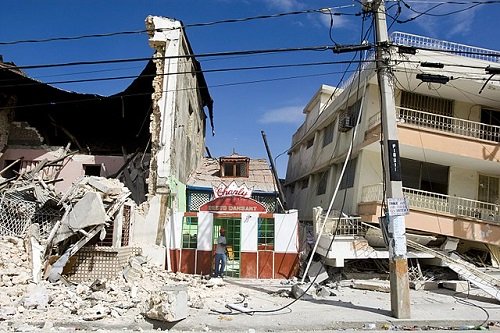 Haiti and the Dominican Republic share the island of Hispaniola. The Caribbean Plate is slipping eastward in relation to the North American Plate. The 7.0 magnitude earthquake occurred where the plates had been locked for 250 years prior to the rocks rupturing. The part of the fault line that broke was 40 miles long and slipped about six feet.

Epicenter of the Earthquake

Why the earthquake was so DESTRUCTIVE

Port-au-Prince was near the epicenter of the earthquake and more than two million people lived in the metropolitan area. There were no building codes and poorly constructed concrete buildings collapsed during the earthquake.