Earthquakes are the release of Energy

Vibrations inside the earth
Have you ever wondered what causes earthquakes?  Earthquakes are vibrations inside the Earth that follow the release of energy that has built up inside rocks. Rocks fracturing, volcanoes erupting, and man made explosions can all release the energy stored in the rocks creating seismic waves. 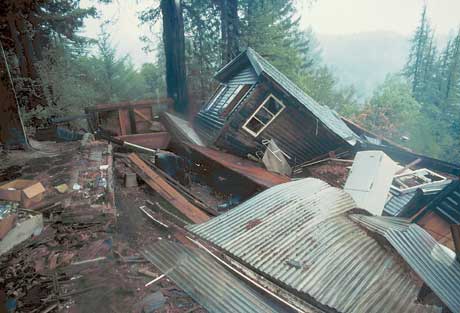 Home near the epicenter of the 1989 Loma Prieta earthquake . USGS

P waves
All earthquakes produce P waves and S waves.  P waves compress and expand the rock particles as they travel through solids, liquids and gases. P waves are the first to arrive at reporting stations letting seismologists know an earthquake has occurred. Shortly after the P waves have arrived seismographs record the arrival of S waves.

Formation of mountain ranges
When two continental plates collide they form mountain ranges between the plates as the rocks are compressed. The Himalayan Mountains are an example of the Indian Plate and Eurasian Plate colliding.

Pacific Ocean is shrinking
Around the Pacific Ocean are subduction zones where an ocean plate is forced beneath a continental plate or a younger oceanic plate. As the Pacific Plate subducts beneath other tectonic plates it is growing smaller.

I am recommending this book for kids who would like to learn more about what causes earthquakes. Each chapter in the book has both material to read and a fun science activity about earthquakes. You will learn about great tsunami generating earthquakes as well as earthquakes so small they are not felt by people.   Myrna

Location and size of an Earthquake