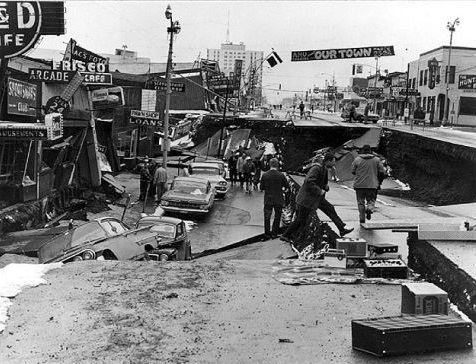 Crustal plate movement
The Pacific Plate moved underneath the North American Plate an average of 27 feet (9 meters) during the earthquake. Parts of Montague Island were uplifted  4-9 meters (12 to 36  feet). The land around the town of Portage subsided approximately 3 meters (9 feet).

Tsunamis generated by the earthquake

Ocean wide waves
The main tsunami that swept across the Pacific Ocean. It killed people in Hawaii when the waves came ashore. It was generated by movement on the ocean floor.

Local tsunamis
Local tsunamis were generated by landslides crashing into bays and fjords. A large landslide triggered a tsunami in Shoup Bay near Valdez.
The wave in the inlet that reached a height of 200 feet (67 meters).

Tsunami damage in Seward
In Seward, a section of the waterfront slid into Resurrection Bay causing an oil fire as it was floating offshore. All the casualties in Seward were caused by tsunami.

Schools and residential damage
The residential area of Anchorage suffered total destruction when the bluffs collapsed. A crevasse ripped apart an elementary school that was closed for the day. The Anchorage International Airport tower collapsed during the earthquake.