What are Normal Faults?

How normal faults are created

Thinning and stretching of the continental crust
Normal faults develop in areas where the land is becoming thinner and stretching as forces within the Earth pulls the land apart. Tension in the crust increases until the rocks break. One block of land slips downward in relation to the other block of land. A fault plane separates the fault blocks. 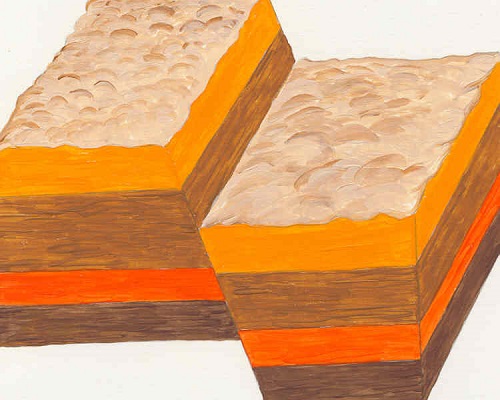 East African Rift System
The East African Rift System is a zone of active volcanoes and faults. The faults have created a series of rift valleys in Eastern Africa. The faulting extends more than 3000 km (1865 miles) from Ethiopia in the north to Zambezi in the south. The African Plate is in the process of splitting apart in this area forming many grabens.

Land dropping below sea level
The area where the grabens are located contain many lakes with lake bottoms below sea level. Lake Tanganyika is located in the area and is the second largest freshwater lake on Earth. It is possible the area may someday become an ocean if the African Plate continues to split apart.

Africa, Mexico and the United States  have Basin and Range areas
Basin and Range areas in Africa, Mexico and the United States are examples of places where the continental crust is thinning. The land is pulling apart in some areas and other areas it is shortening. The result is a series of mountain ranges separated by rift valleys.

Hiking the Basin and Range Province North America
The stretching of the continental crust has created unique areas for hikers.  Hikers have steep trails that go up the mountains that alternated with long hikes across flat valley floors.  People can travel through this area from California or Utah to the state of Sonora in Mexico.