Faults Move Up, Down, and Sideways

What causes faults to move 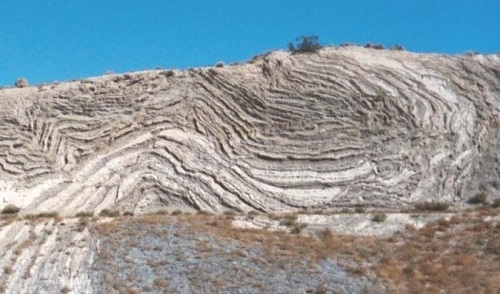 Rocks layers that have moved along the San Andreas Fault

Faults are areas between two block of land that move
Faults are areas between blocks of land that allows the land to move upward, downward or sideways. When the blocks of land are locked together and pressure builds in the rocks on either side of the fault line the rocks can break apart. When the rocks break apart creating an earthquake they can move along the fault line.

Subduction zone faults form where one plate is being forced beneath another plate. The fault line in these areas can be hundreds of kilometers long. When they break along this fault line it creates great earthquakes that can be over 9.0 on the moment magnitude scale.

Normal earthquake faults develop in areas where land is pulling apart or stretching. The rocks fracture and one block of land slips downward in relation to the block of land on the other side of the fault zone.

A reverse fault develops in areas where land masses are coming together. The land is compressed and one side of the fault moves upward.

If the angle between the two land masses is less than 45 degrees one section may slip over another without reaching the surface. Faults with less than a 45 degree angle are thrust faults.

The San Andreas Fault is also called a transform fault. This type of fault is found in the middle of the oceans where plates are moving apart. The transform fault connects two normal faults that are separated due to the curvature of the Earth.