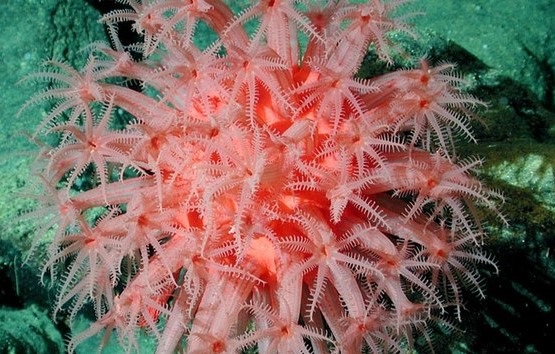 White Cliffs of Dover
Chalk is a well-known rock that has been used by people for centuries. The White Cliffs of Dover are a familiar landmark made of chalk. The chalk cliffs were created by microscopic algae, coccolithophores, that lived during the Cretaceous period.

Skeletons of microscopic marine algae become chalk
The cocospheres break apart and fall to the ocean floor where it collects in sedimentary layers when the algae die. Lime mud forms from the broken cocospheres and mud.

The lime mud is subjected to heat and pressure which removes the water and compacts the sediment. into chalk. Chalk forms when lime mud accumulates in some  areas of the seafloor.

Diatomaceous Earth
Diatoms are minute sea creatures similar to foraminifera. They extract silica, quartz, from ocean water to build their tiny shells. When these microscopic creatures die their shells drift down forming layers of silica ooze.The silica ooze compacts to form diatomite, a soft light-colored rock. Diatomaceous Earth is made from diatomite and is used to filter water.

DE is fossilized remains of diatoms
Diatomaceous earth (DE) is made from the fossilized remains of diatoms. Diatoms are tiny sea creatures like foraminifera. They extract silica (quartz) from ocean water to build their tiny shells. When these microscopic plants die and their shells drift down forming layers of silica on the seafloor. The silica layers compact to form diatomite. Diatomaceous earth is white, crumbly, and made of quartz. 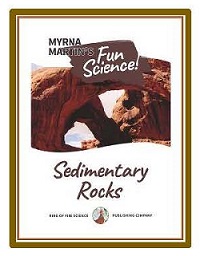 Size of coral polyps
Corals are found in both shallow and deep water and live in all of the oceans on our planet. Individual coral polyps are very small. They are usually about the size of a pencil eraser. The largest polyps are mushroom corals that grow about 12 cm in diameter.

Coral polyp structure
Corals have a simple polyp structure just like sea anemones. Their bodies are like tin cans that are open at one end. The open end is the mouth of the coral. A ring of tentacles surrounds the mouth.

The tentacles all have stinging cells called nematocysts. The nematocysts are used to capture prey as they swim near the coral. The coral captures the prey and moves the food inside their polyp where the tissues digest the food.

Coral reefs are made up of colonies of corals. They grow in shallow water close to the shore of continents and small islands. Fringe reefs grow alongside the shore of a continental land mass.

Enlarging the coral reef
Each generation of polyp builds on top and enlarges the coral reef as they build their homes. The Great Barrier Reef in Australia is so large that astronauts can see it from space.

Formation of Peat and Coal

All freshwater plants and stagnant water plants can form coal. Biologists have identified over 3000 species of plants in coal. As plants die and fall to the ground, microorganisms begin the process of
decay.

Peat
Floods bring in layers of silt that covers the layers of vegetable matter. The silt cover combined with low oxygen content in the water keeps some of the plant material from decaying. The layers at the bottom begin to compress and gases are forced out of the vegetable matter. As the gases are driven out, the carbon content of the rock increases.

A layer of peat 50 meters thick compresses until it is only 10 meters thick when it converts into lignite coal. Dried peat and coal are burned for fuel in many parts of the world.