Rivers of molten lava
Lava caves only form when fluid basalt flows out of a volcano forming a river of molten rock. The sides of the flow slowly crust over forming a roof over the flow. When the eruption stops the lava pours out the end of a lava tube forming a cave. 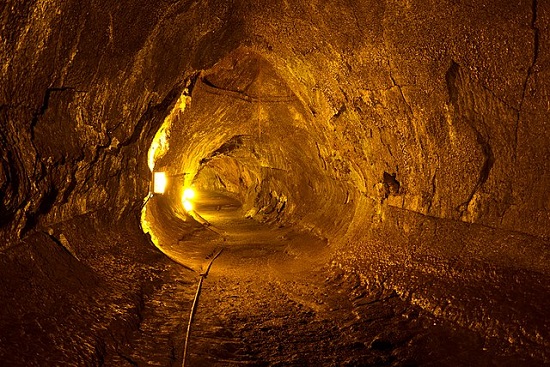 Where caves form
Lava tubes form on the flanks of shield volcanoes. Pahoehoe lava flowing from a volcano vent on the summit of a shield volcano will form channels as the outside edges of the lava flow cool.

Formation of a lava tube and cave
The lava channels are like rivers with riverbanks. The outside edges of the flow crust over forming a roof over the channel as the eruption continues. When the eruption stops the lava tube drains out at the flow front leaving behind a cave

Skylights are windows of lava tubes

Skylights
If the roof of a lava tube is weak, parts of it may fall into the lava flow and be carried away forming a skylight. Scientists often take samples of the lava during an eruption by dipping containers into the flowing lava through a skylight.

Formation of skylights
After the eruption ceases the roof will continue to cool and contract. If the roof over the molten rock is thin it sometimes creates a new skylight. Skylights are often used as entrances to underground caves by people who explore caves. 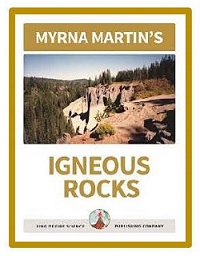 Big Island of Hawaii lava caves
There are many places in the world where you can find these caves. The most important place to study them is the Hawaiian Islands because of the frequent eruptions of Kilauea and Mauna Loa. There are miles and miles of lava tubes that have formed caves on the Big Island of Hawaii.

Lava tubes you can visit
These are some of the lava tubes you can visit on the Big Island of Hawaii. Thurston lava tube (Nāhuku) (in the Hawaii Volcanoes National Park is open daily),  Kaumana Caves (in Hilo, free entrance),  Kazumura Caves (Puna district, only accessible with a tour),  Kula Kai Caverns (Ka'u / Ocean View, only accessible with a tour) HueHue lava tube (Kailua Kona).
Check to find out if and when they are open. Thurst

Thurston Cave (Nāhuku), Hawaii
Thurston Cave on the summit of Kilauea is the most famous cave in the Hawaiian Islands. It is a 500-year-old located on Kilauea Crater in the the Hawaii Volcanoes National Park.

Ape Cave on the Flanks of mount saint helens

Ape Cave, Washington
Ape cave is on the flanks of Mount Saint Helens in Washington. It is one of the longest cave in continental United States.  The cave is open year around. The parking lot gets snowed in during the winter and visitors must walk in to reach the cave.

Hikes inside the cave
The lower Ape Cave is approximately 1.2 km long. The hike is about an hour long. The upper Ape Cave is 2.4 km long and takes about 2.5 hours to complete. This is a much harder climb where people must climb over 27 bounder piles and scale a lava fall.