What are Intrusive Rocks?

intrusive rocks were once molten rock 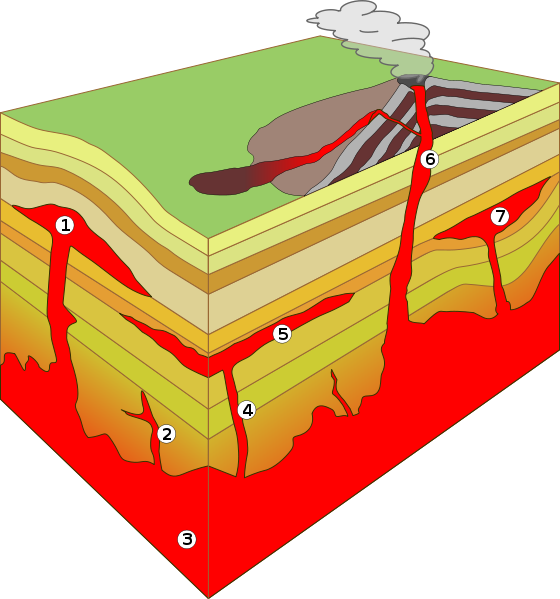 They often occur in subduction zones and mountain ranges. Many batholiths contain several plutons that are solidified magma chambers.

Diameter and thickness of laccoliths
Laccoliths are roughly circular intrusive bodies that are less than 16 km in diameter. They range in thickness from a few hundred meters to thousands of meters thick.

Lopoliths form convex shapes
A large lopolith typically has layered igneous rock intrusions that form a convex shape. The central part of a large lopolith has a sunken bowl like shape . The weight of the molten rock intruding the area causes the underlying country rock layers to sag downward forming the its convex shape in the center.

Sills are horizontal intrusions
A sill is a flat table like structure that magma intrudes between layers of older rocks. Sills are similar in size to dikes. They sometimes form at the same time. Sills may also form columnar structures as the molten rock cools.

Dikes are vertical intrusions
Dikes are a sheetlike body that cuts across the layers of country rocks in a roughly vertical or near vertical direction. The length and width of dikes are much larger than their thickness.

Magma fills in fractures of older rocks
Molten rock (magma) is squeezed into vertical or near vertical fractures in the rocks. The fractures can be less than a few centimeters thick to hundreds of meters thick. Dikes have been found to extend for many kilometers.

Dikes are visible in road cuts
The molten rock  moves upward toward the Earth's surface forming dikes in cracks and fractures of the surrounding country rocks.

The rocks that form in these cracks are often visible in road cuts. They are vertical layers of rock that is a different color than the country rock that surrounds the dike.

Pipes form a volcanic plug that stands alone when the softer sediments around the volcanic neck erode away.