Deposits of pyroclastic flows
Ignimbrite is a volcanic rock consisting essentially of pumice and ash fragments deposited by pyroclastic flows. Ignimbrite forms during the eruption of large-volume ash flows or dense clouds of incandescent rock fragments that are erupted at extremely high temperatures. The rock particles from the ash flow fuse together as they fall to the ground and solidify.

Pyroclastic flows
Pyroclastic flows flows are one of the most dangerous natural events that occur on our planet. They can travel at hurricane speeds down the slopes of a mountain, destroying everything in their path. They travel at speeds up to 80 km/h. The temperature of the rocks in the flows is between 200°C and 700°C. 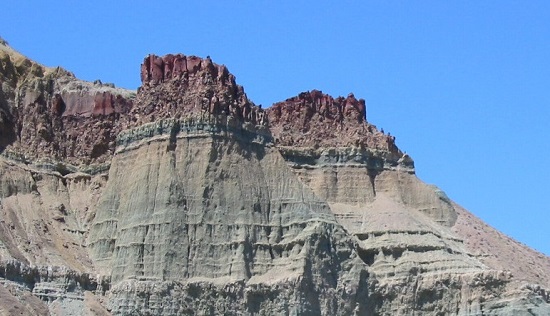 Rattlesnake Formation of ignimbrite
The Rattlesnake Formation is the caprock in the picture. The rim rock was formed during a volcanic eruption about 7 million years ago. The volcano erupted hot ash, cinders and other debris that covers 33,669 sq km  (13,000 sq miles) of eastern Oregon. The ignimbrite in the picture can be seen as the red rocks at the top that welded together to form the caprocks.

Top of pyroclastic flow
A pyroclastic flow will develop a more diluted flow of highly turbulent gases and ash at the top of the flow. This upper flow is called an ash-cloud surge and moves even faster than the heavier fragments at the bottom of the flow.

Front of pyroclastic flow
The superheated ash and gases move in front of the denser materials. The lobes of an ash cloud surge forward billowing out in front of the flow. Leading lobes of the flow will be overtaken and surpassed as other lobes surge ahead.

Ash cloud surges
Ash cloud surges are more mobile than the denser pyroclastic flow and can move over ridges instead of following stream valleys down the mountain.

Lava dome eruptions
The source of the pyroclastic flows was a lava dome that began to form when viscous lava erupted at the summit starting in May 1991 on the edge of a caldera. The dome grew on the edge of a steep slope located on the east flank of the volcano.

June 1912 eruption
June 6,1912 the Novarupta volcano began erupting voluminous amounts of pyroclastic material into the air. The eruption contained molten rock and ash from the magma chambers of Novarupta and nearby Katmai volcano.

The eruption produced pyroclastic flows that filled a valley 20 km long and 3 km wide with ash and pumice. Scientists named the area The Valley of 10,000 Smokes.