Jupiter was given many different names by different cultures. The Babylonians called Jupiter Marduk. Marduk was the patron god of the city of Babylon. The Greeks called the planet Zeus and the Egyptians Her-wepes-tawy.

Jupiter is the king of the gods in ancient Roman religion and mythology. He was the god of the sky and thunder. Over time as the Roman influence spread to many cultures Jupiter was adopted as the official name for the planet.

Auroras and storms on  the surface of Jupiter 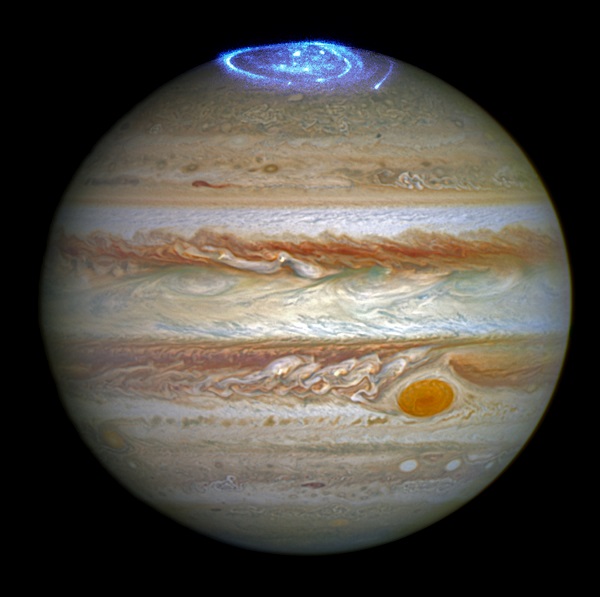 Galilean moons
Galileo Galilei in 1609-1610 looking through his telescope at Jupiter discovered its four largest moons. He named the moons Io, Europe, Ganymede and Callisto. Today, they are called the Galilean moons in his honor. Galileo's telescope was not powerful enough to observe the other 75 known moons that orbit Jupiter.

Ganymede
Ganymede is the largest moon in the Solar System. It has its own magnetic field. The moon also has auroras that are ribbons of light caused by the glowing gases around its north and south poles. Ganymede is composed of equal part silicate rock and water ice.

Ganymede has an iron-rich liquid core and an internal ocean. NASA scientists believe the ocean beneath the icy crust could contain more water than all oceans on Earth combined.

Callisto
Callisto was discovered by Galileo in 1610. It is the third largest moon in the Solar System. Saturn's Titan moon and Ganymede are larger. Callisto orbits Jupiter once every 17 days and is only 1% smaller than Mars. The moon has more craters on its surface than any other object in the Solar System.

Io
Io is smaller than Ganymede and Callisto but is denser than Jupiter's other moons. Hundreds of volcanoes are still active on Io. Some of the volcanoes are erupting fountains of lava high above the moon's surface. Ganymede and Callisto cause tidal forces on the planet. The tidal forces cause the planet to bulge up and down as much as 100 meters.

Europa
Europa is the sixth largest moon in our Solar System. It is slightly smaller than our Moon. and its surface is covered with icy water. Beneath the icy water crust is probably a salty ocean. Europa is a dense moon. It has a similar composition to the terrestrial planets in our Solar System.

Our Space textbook contains sixteen chapters and 136 pages of information about our universe. It includes chapters on Jupiter, Solar System, stars and galaxies. We also offer an e-book with the same information that saves you money and can be downloaded immediately.   Myrna Martin

Jupiter and the Solar System

Jupiter’s day and year
Jupiter is the fifth planet from the Sun. The orbit of Jupiter is four times further away from the Sun than Earth. It takes 43 minutes for sunlight to reach the planet.Jupiter rotates on its axis approximately once every 10 hours. It has the shortest day of all the planets in the Solar System. A Jupiter year is 12 Earth years long.

A gas giant planet
Jupiter is a gas giant without a solid surface where a spacecraft could land. The atmosphere on Jupiter is 5,000 km thick. The air pressure increases as it nears the core of the planet.

Zones and belts of clouds
You will see bands of light and dark clouds that constantly flow around the surface of Jupiter if you look through a telescope. Each of these bands of color are bordered by jet streams.

Areas of high and low air pressure cause the clouds on Jupiter to flow constantly east or west. When the clouds flow clockwise, they form cyclones and anticyclones when they flow counterclockwise.

Zones are high pressure areas
Zones are the light areas in Jupiter’s atmosphere when you look through a telescope or see pictures of the planet. The zones are bands of clouds that form in high pressure areas circulating counterclockwise. The areas of high-pressure zones form high-altitude clouds of white ammonia ice. The ammonia ice clouds obscure the deeper and more colorful layers of clouds below.

Belts are low pressure areas
Belts are the darker areas you see on the surface of Jupiter. The air inside the belts circulate clockwise in low pressure areas. The ammonia ice clouds are not thick enough to obscure the deeper layers of clouds that contain ammonium sulfide, ammonium hydrosulfide, and organic compounds. These chemical and organic compounds give the belts their brownish color.

Earlier observations of the planet indicate that the storm might have been observed by astronomers between 1665 and 1713. No one knows if the astronomers saw the Great Red Spot or a different storm that might have dissipated after 1713,

In 2004 the length of the storm was about half the size it was in 1904. The storm’s edges in 2019 began breaking off and dissipating. At the present rate it is decreasing in size the Great Red Spot may become round instead of an oval by 2040.

Theories about Jupiter’s core
It was suspected that Jupiter had a dense core surrounded by a layer of liquid metallic hydrogen with some helium mixed in that extends outward from the center of Jupiter.

Jupiter’s diffuse core
The Juno probe found that the planet has solid rocks mixed with a bubble of hydrogen gas that creates a diffuse core instead of a dense solid core. Scientists theorize that a planet may have smashed into Jupiter causing the diffuse core in the early days of the formation of the solar system.

Magnetic Fields at the North and south pole

Electrical current between Io and Jupiter
Jupiter has a strong magnetic field at each of its poles. Every 10 hours the magnetic field rotates in a circle. Io is one of Jupiter’s moons that was discovered by Galileo. Every 1.8 days Io orbits around Jupiter. 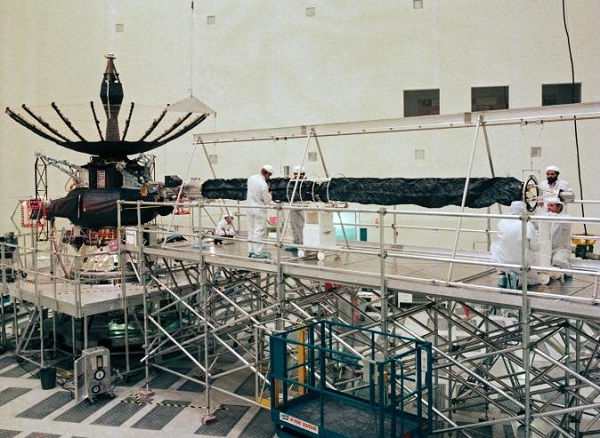 The Galileo spacecraft as it was being built on November 1, 1984 at the JPL's Spacecraft Assembly Facility.  The workers are wearing protective gear in the clean room so the spacecraft would not be contaminated before being launched into space. NASA/JPL-Caltech

Galileo's mission
The Galileo spacecraft was an unmanned space probe. It was launched on October 18, 1989 to study Jupiter with 10 science instruments and a descent probe that took samples of Jupiter’s atmosphere. The spacecraft did not have enough fuel to fly to Jupiter so Galileo orbited Venus and Earth in flybys to get enough momentum to reach Jupiter. The Galileo mission lasted fourteen years.

On the trip to Jupiter the spacecraft flew past two asteroids, had direct observations of a comet Shoemaker-Levy crashing into a planet, and a flyby of Venus.

Other discoveries made by the Galileo spacecraft included the existence of an ocean beneath Europa’s icy surface, volcanic activity on Io and a magnetic field on Ganymede.

Galileo was the first spacecraft to orbit Jupiter. The spacecraft mission ended on September 21, 2003 when Galileo plunged into Jupiter’s atmosphere to keep it from colliding with Europa and harming its ocean.

NASA’s Juno spacecraft and mission
People have wondered about the structure of the planets since Galileo discovered the bright lights in the skies were not stars but planets that orbited the Earth.

The Juno spacecraft was launched on August 5, 2011. It arrived on July 4, 2016 to study the atmosphere of the planet. It is in polar orbit around the planet. The space probe was powered by solar panels to travel to Jupiter and power the various instruments on the spacecraft while circling the planet.

Information being gathered by Juno
The spacecraft is sending back information on the planet’s composition including its core. Information from the various instruments on the spacecraft will study its gravity field, magnetic field and polar magnetosphere.

Scientists are also studying the amount of water in its atmosphere, how its mass is distributed and the winds in the clouds.

The Juno spacecraft is still operational as it continues to send back information to NASA. When the mission is ended it will plunge into the atmosphere of Jupiter where it will burn up.

Gravity captures the comet
The gravity of Jupiter captured the comet Shoemaker-Levy causing it to orbit the planet. The orbiting comet was broken apart by Jupiter’s gravity. The comet and its fragments continued to orbit the planet for two years before being destroyed.

The comet collides with Jupiter
NASA’s Galileo orbiter was enroute to the planet in 1994. The orbiter took photographic images of the collision when the comet crashed into Jupiter in July 1994. Between July 16 and July 22 twenty fragments of the comet collided with Jupiter. It was the first-time astronomers were able to observe the actual collision of two extraterrestrial bodies colliding in our Solar System. The information gathered about the collision provided new information about the composition of Jupiter’s atmosphere.

July 19, 2009 an impact crater was discovered that warmed the lower atmosphere near Jupiter’s south pole.

March 17, 2016 an asteroid or a comet struck Jupiter. A video of the impact was filmed by Gerrit Kernbauer, an Austrian amateur astronomer. He was studying the planet with his 20-centimeter telescope when he observed the event.