Did you know Marine Sponges are animals?

Marine sponges are sessile animals that look like plants. They attached themselves to a rock, shell or seafloor when they are young and there live for the rest of their lives. They filter water through their porous body for the food they eat. They eat bacteria and other particles floating in the water as it moves through their body. They live on the seafloor in tide pools and the ocean floor after the larvae attaches itself to a surface where they live the rest of their life. Some sponges have been found living on ocean floors that are up to 8,800 meters (5.5 miles) deep. 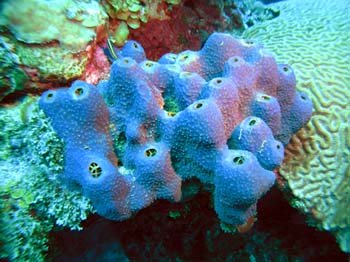 There are over 5,000 named species with 99% of them living in salt water. Most marine sponges live in warm tropical waters. The fertilized eggs of sponges form larvae which live as plankton until they find a suitable place to settle and grow into an adult sponge.

Sponges are the simplest multicellular animals

Sponges are the simplest of multicellular animals with bodies full of pores. They do not have heads, arms or internal organs. Instead, they have water flowing through their body up to 20,000 times their own volume each day. The water contains plankton, bacteria and oxygen they need to survive.

The water is pulled into the sponges bodies through tiny pores that cover the outer surface of their body. Cells inside their body filter food from the water. Flagella pushes the water through canals in one direction as the sponges get their nutrition and oxygen before the water exits their body at another opening the oscula. The oscula is a large opening in the sponge’s body.

All marine sponges belong to the phylum porifera

All marine sponges belong to phylum Porifera. They come in a wide variety of shapes, sizes and colors. Some marine sponges form encrusting sheets on rocks while other create volcano-shaped mounds. Their tubes that the water flows through can be as small as one millimeter or as large as one meter. Their colors include gray, red, yellow and blue. Algae grows on some of them giving them a green color.

A marine sponge that lives in deep cavities in coral reefs gets its nutrition from organic carbon that is inedible to most coral reef inhabitants. The sponge absorbs and uses 50% of its body weight each day to make new cells.

Researchers found the sponges didn’t grow in size but instead shed a large number of cells each day that provided nutrients for other coral reef inhabitants. The sponges are essentially recycling organic carbon that is used by other reef inhabitants.

Sponges use chemical compounds for protection

Sponges are also being studied by biologists because many species have developed a wide variety of chemical compounds to protect them from their enemies. Sponges have been found to produce more elaborate compounds than any other animals living around coral reefs.