One of the great wonders of the natural world 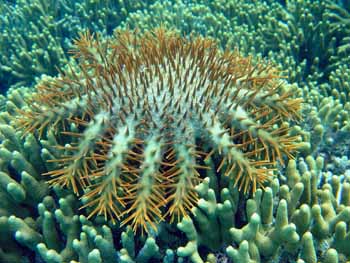 Reefs are coral skeletons
The 2,900 individual coral reefs that make up the Great Barrier Reef are the skeletons of coral. Coral polyps are tiny invertebrate animals about the size of a pencil eraser. There are hard and soft corals that live in the oceans but it is the hard corals that create reefs. They extract calcite (calcium carbonate) from ocean water to create the hard structures that make up their exoskeletons. These hard structures protect them from predators.

This Oceans books is designed for students who want to learn about the oceans for a class. It contains 16 chapters, quizzes and activities about the ocean. Chapters include Tide Pools, Coral Reefs, and Mollusks.  Myrna Martin

How The original corals started a coral reef

Reefs increase in size as corals build new homes
The original corals that created each reef are attached to the rocks on the seafloor. Each succeeding generation builds their homes on top of the previous generation’s exoskeleton made of calcite extracted from seawater. Over the centuries the reefs increase in size. The Great Barrier Reef is so large that it is the only living structure that can be seen from outer space by the astronauts.

Sanctuary and home for plants and animals

600 species of corals in the reefs
The coral reefs provide a sanctuary and home for a large variety of plants and animals. There are over 600 different species of hard and soft corals that make up the reefs. Jellyfish, mollusks sharks, whales and dolphins are just some of the animals that live all or at least part of the time around the coral reefs.