Discovery of entire ecosystem on the ocean floor

Black smokers discovered in 1977
Black smokers (hydrothermal vents) were discovered by scientists aboard the Alvin in 1977. They were looking for vents in the ocean floor where hot lava flowed out and mixed with seawater on the ocean floors where tectonic plates were separating. Scientists aboard the Alvin were stunned to find an entire ecosystem living off bacteria around hydrothermal vents. 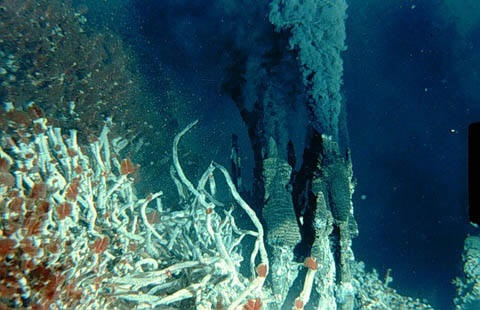 Black smoker surrounded by an unknown ecosystem prior to 1977.  NSF

Huge tube worms lived in the area
The oceanographers in the submersible found huge tube worms, giant clams and other animals living around chimney-like structures with black smoke-like material flowing out of the top of the structures. They named the area around the vents the Rose Garden and the vents were nicknamed black smokers.

Theory of how new seafloors were created
Scientists had speculated that hydrothermal vents might lie along the spreading ridges where tectonic plates were separating. This speculation began after Harry Hess proposed a theory that new seafloors were being created at mid-ocean ridges and were being destroyed in subduction zones. Magnetism in the rocks that are located on either side of the spreading ridge proved the hypothesis.

Sulfur-bearing minerals around the Vents

How the vents are created
These vents are created by hot water seeping down into cracks on the ocean floor where plates are separating. The ocean water is superheated up to 350°C (662°F) by the hot lava. The superheated water dissolves minerals in the basalt on a mid-ocean ridge volcano creating high concentrations of sulfur-bearing minerals called sulfides.

How the Vents are formed

People did not believe life could exist on the ocean floors
Scientists had long believed that nothing could live at the great pressures found on the ocean floors and that all life on our planet required sunlight to thrive. Both of these theories were proven incorrect in 1977 when the first hydrothermal vents were discovered. 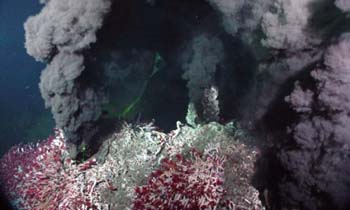 Black smokers surrounded by ecosystem that is not dependent on the sun, NOAA

Bacteria are the basis of the food chain

Bacteria are basis of the food chain in the vent area
Giant tube worms, long necked barnacles, giant clams all lived in communities around the smokers. Since their discovery it has been found that a unique type of bacteria is able to metabolize large amounts sulfur that is found in the superheated water that flows out of the vents. The bacteria are the basis of the food chain because no sunlight reaches these areas that are often over a mile deep.

Three areas of seafloor are being studied
Three areas being studied by scientists today are the ridge on the Juan de Fuca Plate that lies off the Oregon and Washington coast, Galapagos Rift along the eastern Pacific Ocean basin, and the Southern East Pacific Rise in the Southern Pacific Ocean. Only a small portion of the ocean floor has been studied and it is expected that many more black smokers will be found in future years.