The Atlantic Ocean is increasing in size 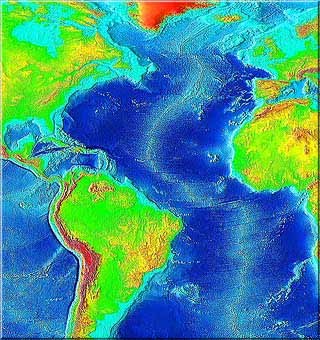 Mid-Atlantic Ridge  runs down center of the Atlantic Ocean NOAA

The entire global mid-ocean ridge system which is a continuous system of rift zones is 80,000 kilometers long. It is the largest geological feature on our planet and lies underwater except for a few islands.

The HMS Challenger expedition in 1872 carried onboard three scientists that were studying the ocean floor because a transatlantic telegraph cable was going to be installed in the near future. The scientists discovered a large rise in the ocean floor during the expedition. Early in 1850 Matthew Fontaine Maury inferred there was a ridge in the middle of the Atlantic Ocean the HMS Challenger confirmed its existence during the 1872 expedition.

Our Earthquakes & Tsunamis is 97 pages long and includes fascinating facts about earthquakes and tsunamis. You will learn about the first earthquake detector, how earthquake's magnitude is determined and which earthquake waves travel in the body of the Earth in this book.  Myrna Martin

Mapping the ridge with sonar

The Mid-Atlantic Ridge was mapped by three scientists using sonar that had been developed during the World War II. They found rift zones that included valleys and ridges the entire length of the Atlantic Ocean. Running down the entire length to the Mid-Atlantic Ridge was a central valley where many earthquakes occurred. This discovery led to the general acceptance of Alfred Wegener’s theory of continental drift which became known as the Theory of Plate Tectonics. 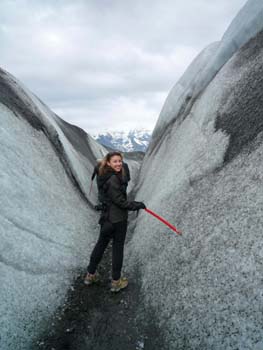 Walking on the Mid-Atlantic Ridge in Iceland     Sarah Masters

Iceland lies on the ridge

Iceland lies on the northern part of the Mid-Atlantic Ridge. It has formed over both the ridge and a hot spot. Iceland on the western side is part of the North American Plane and on the eastern side lies the Eurasian Plate. The Thingvellir Rift Valley on Iceland is about 10,000 years old where the plates are separating.