Scientists monitor volcanoes to save lives
Alaskan volcanoes are monitored today by scientists. Over 40  are potentially active volcanoes. These volcanoes are a major threat to airplanes flying over the state because the ash could cause an airplane to crash.  There are another 50 volcanoes in Alaska that might be dormant and could erupt with explosive eruptions in the future.

Mt. Pinatubo in the Philippines was considered extinct. In  1991 it produced the second largest eruption of the 20th century and had been dormant for 400 years. 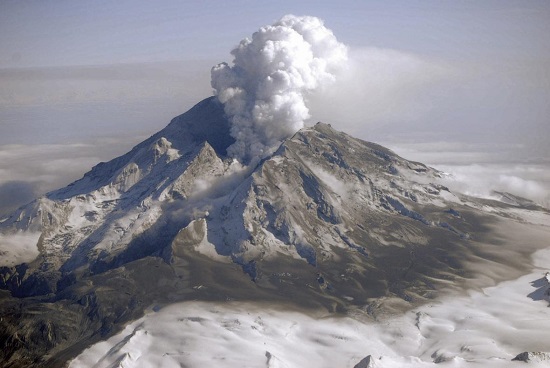 Hazards to airplanes
The Alaskan volcanoes can erupt at any time sending a plume of ash thousands of feet into the air that potentially could cause planes to crash hundreds of miles from the eruption.

Ash clouds
Sometimes the ash clouds reach over 45,000-feet. Redoubt volcano is only 110 miles southeast of Anchorage. Airplanes routinely fly over or near the mountain. The last eruption in 2009 shut the Anchorage airport down several times because of the potential danger from the erupting ash.

Aleutian chain
Remote volcanic islands on the Aleutian chain can erupt at any time. Most of the islands are in a subduction zone with active volcanoes. The ash from one of these volcanoes poses a major threat to airplanes flying over the North Pole area from Asia.

747 Jet near Redoubt Volcano
An airliner with 231 passengers flying at 27,900 feet suddenly had its engines flame out when it flew into an ash cloud. As the airplane began dropping toward the Earth the crew frantically tried to restart the engines.

Ash cloud dangers
The 747 jet had flown into an ash cloud erupted by Redoubt volcano. The volcano began erupting on the morning of December 15, 1989 had been erupting for 10 hours prior to the airplane flying through the ash cloud. Redoubt continued to erupt into 1990. The eruptions spewed enormous amount of ash into the air and clouds over the volcano.

Augustine volcano
Augustine volcano is another stratovolcano with a lava dome at its summit. The volcano has an irregular coastline because of volcanic activity. the first recorded eruption of the volcano was in 1812. The dangers from this volcano is primarily from ashfall and tsunamis generated by pyroclastic flows.

Mount Spurr in the Aleutian chain

Activity on Mt. Spurr
Mt. Spurr is the eastern most volcano in the Aleutian chain. It is the tallest peak that grew after a much larger stratovolcano erupted creating a large caldera. A new satellite cone is growing 3.2 km Mt. Spurr named Crater Peak. Almost all recent activity has been centered at Crater Peak.