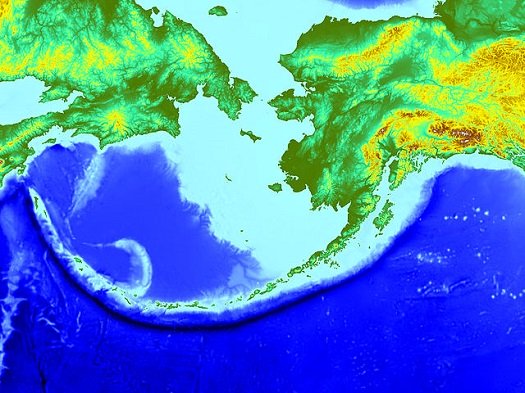 Black line below Aleutian Islands is the Aleutian Trench NOAA

Triple crustal plate junctions
Both ends of the trench stop at a triple junction where three crustal plates meet. The trench runs from the southeast coast of Alaska to the Kamchatka Peninsula in Russia.

Volcanic arc of islands
A line of volcanoes have formed parallel to the trench. The volcanoes in the North Pacific have formed an island arc. These volcanoes make up the Aleutian Islands.

Formation of volcanoes
Some of the volcanoes parallel to the trench are on the Alaska Peninsula forming a volcanic arc of stratovolcanoes. Redoubt Volcano, Mt. Spurr and Katmai Volcano are three volcanoes that are part of this section of the Aleutian Arc.