What is the Challenger Deep? 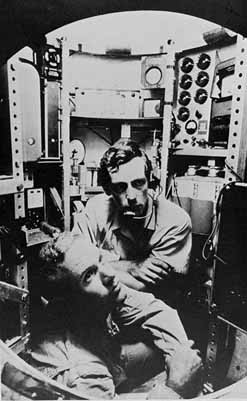 Jacques Piccard and Lieutenant Don Walsh aboard the Trieste, NOAA

HMS Challenger
The slot was discovered during an expedition of the British Navy aboard the HMS Challenger. They were surveying areas in the Pacific Ocean from 1872 to 1876 when they found the slot.

How it was named
The name Challenger was in honor of the boat they were on. The term deep was used to describe places that were deep in the ocean. The Marianas Trench is located near the Mariana Islands and is 190 miles from Guam. 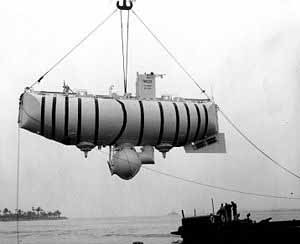 First manned descent to the deepest point on Earth    NOAA

The first descent
The first manned descent to the oceans deepest point occurred in 1960. On January 23, 1960 a US Navy submersible Trieste manned by Jacques Piccard and Lieutenant Don Walsh descended to the bottom of the trench. The floor of the ocean where they descended to was 35,838 feet deep.

James Cameron’s solo dive
James Cameron in a solo dive went to the floor of the Challenger Deep. He recorded his trip in 3-D. It was on March 27, 2012. It took 7 years of preparation for his dive. The National Geographic Society helped James Cameron finance his dive. Because of the murky water he was not able to take a major set of pictures while he was on the floor of the Challenger Deep. He plans to return in the future with another mini-sub.

Five Deeps Expedition
Victor Vescovo, an American explorer, finished his five dives to the deepest points in all the world's oceans. His deepest dive was to the bottom of the Challenger Deep. The record-breaking dive was 10,924 meters. It broke the record of the two previous dives in 1960 and 2012.  His dive was completed in May 2019 and will be a documentary series on the Discovery Channel. Three new species of marine animals were discovered on the dive.

Challenger Deep prize
Today there is a prize being offered by the X Prize Foundation for any privately funded manned craft that travels to the bottom of the down to the bottom twice. The owners of the craft will receive a $10 million prize.

Nereus an unmanned submarine
The Nereus, an unmanned submersible,  was launched on May 31, 2009  to study the Challenger Deep. The submarine was slightly more than four meters in length.  During the dive pictures were taken and a video of the ocean floor.  The vessel was also able to bring back to the surface shrimp and a sea cucumber.

The vessel was connected to the research vessel Kilo Moana by a tether that was the width of a human hair. The tether allowed pilots on the Kilo Moana to control the vessel. The lightweight, micro-thin fiber optic tether is a new design that does replaces the steel-reinforced cables of other unmanned submersibles.