What are Convergent Boundaries? 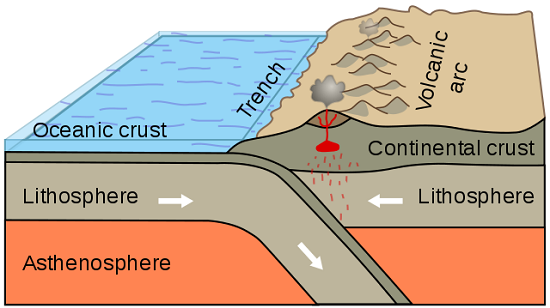 Convergent boundary in a subduction zone between a continental plate and an oceanic plate.  USGS

Subduction zone
The subducting plate is being recycled as it begins to melt at about 100 kilometers. The water soaked oceanic plate forms molten rock that collects in magma chambers.

Buoyant molten rock
The molten rock is buoyant because it is hotter and less dense than the surrounding rocks. The rocks move up through the overlying rocks to erupt at volcanic vents forming an arc of volcanoes on the continental side of the subduction zone.

When the fault line is close to populated areas the time between the earthquake and the arrival of the first tsunami on the seashore can be only a matter of minutes. People living in low-lying areas are especially vulnerable to being swept away by tsunamis.

The breaking rocks allow the overriding plate to slip over part of the subducting plate all along the fault line. The plate movement on the ocean floor can cause a tsunami. The 2004 Indian Ocean tsunami was triggered by a megathrust earthquake at a convergent boundary.