What is Earth's Atmosphere? 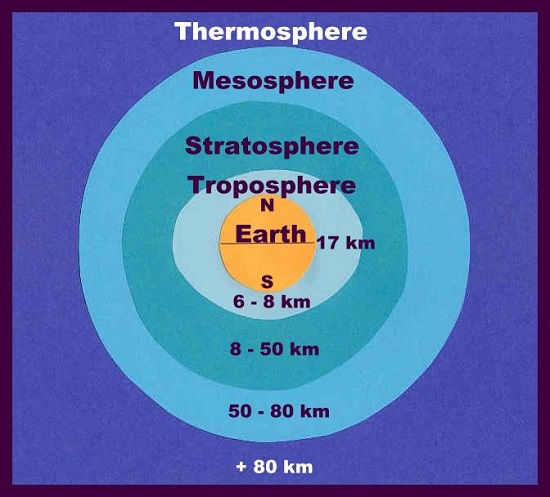 Layers of the atmosphere

People have been looking up at the heavens while sitting around campfires for thousands of years. Today 12 men have walked on the Moon. Our book on space includes chapters on our Solar System, the Moon, life cycle of stars and the Hubble Telescope. Each chapter contains written information, quiz and an activity about space.  Myrna

The stratosphere begins above the tropopause which is the boundary between these two parts of the atmosphere. It extends to 51 kilometers (170,000 feet) above the Earth. The air increase in temperature in this layer as the ozone molecules absorb ultraviolet radiation from the Sun.

The mesosphere extends from the upper boundary of the stratosphere up to 85 kilometers (280,000 feet) above the Earth. Shooting stars (meteors usually burn up in the part of the atmosphere. It is also the coldest place on Earth. At the boundary with the thermosphere the average temperature is -85 degrees Celsius. Water vapor is frozen in this layers forming ice clouds.

The exosphere contains hydrogen and helium. The individual particles are spaced so far apart they can travel hundreds of kilometers before striking another molecule. The particles migrate into and out of the solar wind in this part of the atmosphere.