The Hawaiian volcanoes are giant shield volcanoes. They have formed over a stationary hot spot in the middle of the Pacific Plate. The tops of some of the volcanoes are tall enough to form islands that are above the surface of the ocean. The state of Hawaii consists of eight main islands and an archipelago that stretches 1600 miles in length. 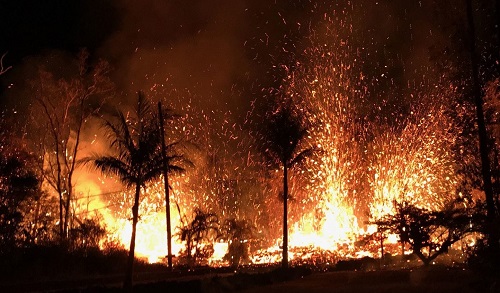 Fissure eruption on the summit of Kilauea in 2018.   HVO-USGS

Mauna Loa volcano
Mauna Loa is not as tall as Mauna Kea. Mauna Loa measured at sea level is 4169 m (13,679 ft.) tall. Mauna Loa is the largest volcano on Earth in terms of volume and area covered. The volcano's estimated volume is 75,000 cubic meters (18,000 cubic miles). The volcano is still active and there have been 33 eruptions since 1843.

1984 eruption of Mauna Loa
The last eruption in 1984 stopped just a few miles short of Hilo, Hawaii. The volcano does not erupt as often as Kilauea but when it erupts the volume is much greater. During the last eruption in 1843 the volcano spewed out more lava that Kilauea usually produces in three years and came within a short distance to Hilo.

the most active Hawaiian volcano is kilauea

Kilauea volcano
Kilauea is one of the most active volcanoes on our planet. The volcano began the longest rift-zone eruption in historic times on January 3, 1983. Lava fountains formed in the rift zone about ten miles below the summit caldera. Powerful eruptions threw molten rock high in the air building a cinder cone.

New vent forms on volcano
A new vent in 1986 created a lava lake on top of a small shield volcano. The small shield continued to increase in size and was about 180 feet tall and 4800 feet at its base by 1991.

the Hualalai volcano is near Kona

Hualalai Volcano
Hualalai Volcano is the third most active Hawaiian volcano and is located on the Kona side of the Big Island. The last eruptions of the volcano was over 200 years ago. Two eruptions in 1800 and 1801 produced lava flows from the northwest rift zone. The Kona airport lies on top of one of these flows.