What are Horse Latitudes?

What are Horse Latitudes

Horse latitudes location
The horse latitudes are located about 30 degrees north and south of the equator. The region lies in an area where there is a ridge of high pressure that circles the Earth. Warm, dry, and sunny conditions over the oceans creates Earth's major deserts that are not in the polar regions.

Subtropical high
The ridge of high pressure is also called a subtropical high and is one of several regions where high atmospheric pressures occur over the oceans. The subtropical latitudes are located both north and south of the equator in the Northern and Southern Hemispheres of 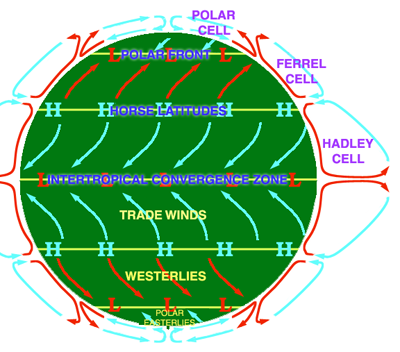 Location of major wind currents on the surface of Earth, USGS

Sailing in the Horse Latitudes

Deserts in the horse latitudes

Deserts form in the horse latitudes
These warm dry conditions lead to many well known deserts. In the Northern Hemisphere deserts that lie in this subtropical high included the Sahara Desert in Africa and the southwestern deserts of the United States and Mexico. The Atacama Desert, the Kalahari Desert and the Australian Desert are all located in the southern Horse Latitudes.

Origin of the name Horse Latitudes

Two explanations for the name
There are two explanations of how these areas were named. This first explanation is well documented. Sailors would receive an advance in pay before they stated on a long voyage which was spent quickly leaving the sailors without money for several months while aboard ship.

Sailors work off debt
When the sailors had worked long enough to again earn enough to be paid they would parade around the deck with a straw-stuffed effigy of a horse. After the parade the sailors would throw the straw horse overboard.

Second explanation about horses
The second explanation is not well documented. The Horse Latitudes got their name from the time when Spaniards carried horses aboard their ships when they were sailing to the colonies in the West Indies. The sailing ships sometimes became becalmed and the ships ran out of water before reaching land. The dead and dying horses were thrown overboard.