Iceland's active volcanoes
Iceland volcanoes are some of the most active volcanoes on our planet. They erupt often and can have devastating results. The volcanoes have brought famine and death to the people living on Iceland when ash killed food crops and livestock during an eruption in 1783. 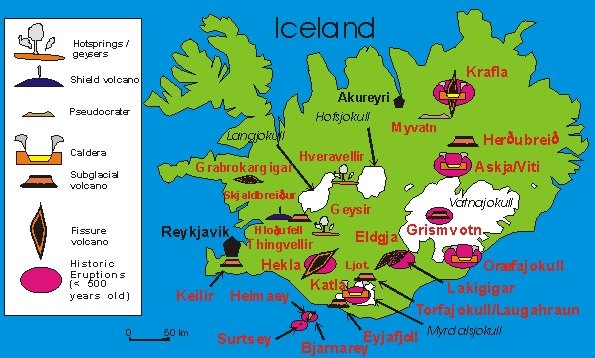 How often do volcanoes erupt on Iceland
Volcanoes on Iceland erupt approximately once every 5 years. Iceland has 30 volcanoes that could erupt at anytime. Only 13 of the volcanoes has erupted since the island was settled in 874 A.D.  The most famous volcano on the island is Hekla. Hekla has erupted 18 times since 1104 A.D.

Eruption near the fishing village of Heimaey
The town of Heimaey is a fishing village that was only 200 - 300 meters from the vent of a volcano when it erupted in 1973 in the middle of the night. The last time the volcano erupted was 5000 years ago.

Icelander's save their village
There was no warning prior to the start of the eruption. Residents fled the island by boats and aircrafts. A few people remained on the island in a desperate attempt to save the village.  Barriers were erected to protect the village. Water was pumped from the ocean through hoses to cool the molten rock it flowed toward the village and the harbor. The village was saved and new land was created in the harbor area by the lava flows. The harbor after the eruption was safer because the new land protected the harbor from wind and ocean waves.

Eruptions on the mid-atlantic ridge

Lava eruptions
Cracks develop in the valleys allowing magma (molten rock) from the mantle to erupt on the Earth's surface sealing the cracks until the next eruption. The new seafloor is built of molten rock from the upper mantle as it flows onto the seafloor creating pillow basalt.

Persistent hot spot
Iceland rises above the surface of the Atlantic Ocean because it also sits atop a persistent hot spot. Hot spots are places where plumes of hot rock melt the Earth's crust and magma flows out of the vent of volcanoes. The lava forms a seamount that is an underwater volcano.

Island formation
When a seamount reaches the surface of the ocean it becomes an island. The combination of sitting between two tectonic plates that are separating and over a hot spot has allowed Iceland to grow into a medium size island about half the size of Great Britain.

Scientists study Surtsey Island
Today scientists monitor the island. No other visitors are allowed on the island. Scientists are studying both the Mid-Atlantic Ridge and the hot spot beneath the island. They are also studying plant and animal life on the island as they adapt to the barren land.