What are Island Arcs?

Where Do island arcs Form?

Island arc formation
Island arcs form on the crest of curved crustal ridges bounded on one side by deep oceanic trenches. The trenches form as the subducting oceanic plate is bent downward and plunges beneath the overriding plate.

Island arcs are volcanic islands that form parallel to ocean trenches in subduction zones. The Pacific Ring of Fire is home to many of these groups of islands. Volcanoes that form above hot spots like the Hawaiian islands are not volcanic arcs. 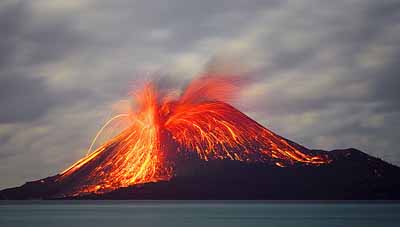 Formation of island arc
The leading edge of the oceanic plate begins to melt as it is forced deep into the crust and upper mantle. The melting plate feeds magma chambers that supply volcanic islands that form an arc when the molten rock erupts onto the ocean floor of the overriding plate.

Arc of volcanoes on continents
Arcs of volcanoes form on land and not in the ocean. The arc forms due to the curvature of the Earth. Many of the volcanoes are either active or dormant.

Dormant volcanoes
Dormant volcanoes have not erupted in the past 10,000 years but scientists expect they will erupt again. Composite volcanoes (stratovolcanoes) often have long periods between eruptions.