Source of the eruption

Katmai first thought to be source of the eruption
Katmai volcano was incorrectly thought to be the source of the largest eruption of the 20th Century. The great eruption began on June 6, 1912 after large earthquakes shook the region on the previous two days. The area was so remote that it was four years before Robert Griggs led an expedition to investigate the eruption. The expedition was funded by the National Geographic Society. 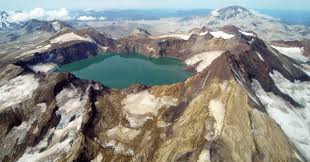 Katmai summit with lake in the caldera, USGS

Little was known about Katmai before 1916
Prior to the great eruption the volcano was a little known 7,500 ft peak in Alaska. The expedition studying the eruption found that the volcano was drastically altered after the event.

Summit collapsed during eruption
The summit of the volcano had collapsed when magma drained out of the volcano during the eruption. The summit's collapse formed a two mile wide caldera that had started to fill with water from melting snow.

Horseshoe Island Dome
The small dome was named Horseshoe Island. Horseshoe Island was visible when Griggs and his party studied the summit of the Katmai. Today the island is covered with water. The lake in the caldera is now 800 feet deep. Small glaciers have also formed on the slopes of the snow covered peak