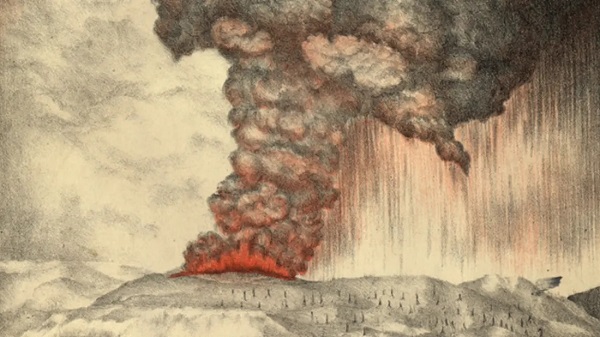 Lithograph of the eruption c. 1888 of Krakatoa

Island before the eruption

Krakatoa Island prior 1883
Prior to 1883 the three volcanoes that made up Krakatoa island had not erupted for over 200 years. Then steam and gas eruptions began in the spring of 1883 delighting passing ships and villagers living in the region.

The day of the eruption

Most island blown away
Early the next morning four great eruptions began about 5:30 am culminating in a blast that blew two-thirds of the island away creating a six kilometer wide caldera. These eruptions were heard throughout the Indian Ocean and as far away as Australia.

Tsunamis
Pyroclastic flows generated tsunamis that swept over nearby islands sweeping over 3000 people into the ocean from just one island. The Dutch estimated approximated 36,000 people died during these two days.

Krakatoa today
Today Anak Krakatoa in the image above has grown into a small island in the caldera formed by the 1883 eruption. The volcano is still active and is closely monitored by geologists.