Lahars look similar to flowing concrete
Lahars are mudflows that originate on the slopes of a volcano. The mudflows contain so much rock debris they look and feel like flowing wet concrete. They are triggered by a variety of events including pyroclastic flows, rainstorms and the collapse of debris dams. 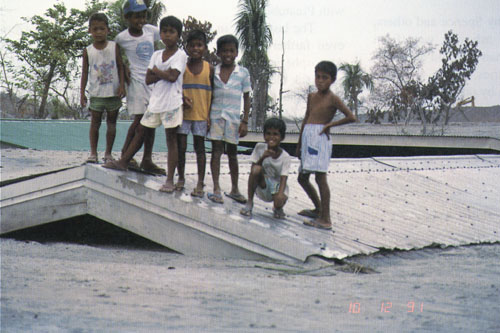 Debris mudflows
Pyroclastic flows contain superheated gases and rock debris that explodes from a mountain during a volcanic eruption. Glaciers on volcanoes melt as the pyroclastic flow roars down the mountain, creating debris filled mudflows in their wake.

Debris dams
Debris clogging a river channel can create a dam. The water backing up behind the dam forms a lake. Melting snow or rainfall can cause the dam to collapse triggering a large lahar choked with debris that had accumulated behind the dam.

Destructive lahars
Mudflows containing heavy loads of ash and debris can carry boulders and logs down the mountain that act as battering rams destroying everything in their path.

Armero, Columbia
The town of Armero in Columbia was struck by a mudflow in 1985. The mudflow began when a small pyroclastic occurred on Nevado del Ruiz, a volcano about 30 miles away. The mudflow was 9 to 15 feet high when it struck the village late at night as the people in the village sleeping. Twenty-two thousand people were killed by the lahar.

Pinatubo mudflows
Hundreds of volcanic mudflows swept down Mount Pinatubo following the eruption of Mount Pinatubo in 1991. During the monsoon season that year there were often two or three mudflows each day that carried mud and rock debris from the upper slopes into the valleys below.