1912 Novarupta volcano eruption
The 1912 eruption by Novarupta volcano was the largest eruption of the 20th century.  The Novarupta eruption occurred in a remote area of Alaska where very few people lived. It was four years before an expedition explored eruption and the region where it took place. 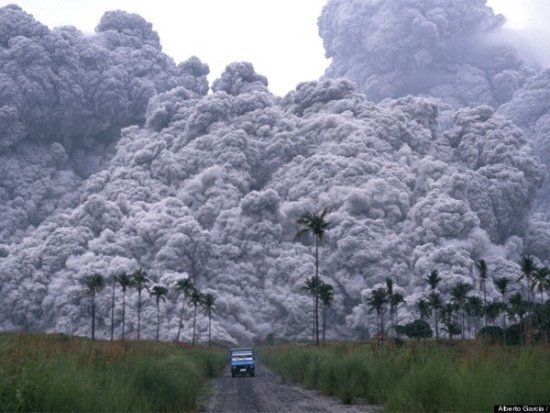 People fleeing the pyroclastic flows during the 1991 eruption

The mountain awakes after 500 years
Pinatubo had not erupted for 500 years prior to its climactic eruption in 1991. Scientists had thought the dormant volcano was extinct and would never erupt again. Instead it was a sleeping giant with magma quietly collecting 20 miles beneath the volcano.

The mount awakens with a 7.8 earthquake
The volcano began awakening in 1990 when a 7.8 earthquake shook the area. The following spring thousands of earthquakes and tons of sulfur dioxide were emitted by the volcano warning scientists and people living near the volcano that an eruption was coming.

evacuation prior to the eruption

Red zone evacuated June 12th
On June 12th just three days prior to the eruption the red zone was extended and 58,000 people evacuated the area. Over 800 people who stayed behind and refused to leave their homes were killed during the eruption.

Eruption during a typhoon

Typhoon Yunya
Typhoon Yunya was moving through the area on June 15 during the eruption. The initial eruption on June 15 sent an ash plume twenty-two miles into the atmosphere.

Pyroclastic flow caused by the eruption
Pyroclastic material deposited by pyroclastic flows in the valleys below the volcano still measured over 482 °C five years later.

Lahars during and after the eruption
Lahars, volcanic mudflows, carried ash that fell on the upper reaches of the volcano into the valleys covering entire villages near the volcano. Over a billion dollars in damage occurred as a result of the eruption.

Worldwide effects due to the eruption

Aftermath of the eruption
Sulfur dioxide spewed into the atmosphere during the eruption. It combined with water and oxygen in the atmosphere creating sulfuric acid which triggered ozone depletion over the South Pole. It also lowered temperatures worldwide in 1992 and 1993.