Mt Spurr is a stratovolcano located west of Anchorage, Alaska. It is the highest peak in the Aleutian Arc. The volcano was named for the explorer Josiah Spurr who worked for the USGS. 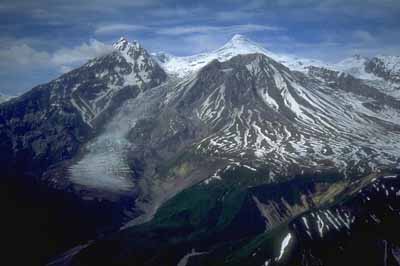 Destruction of the original summit

Original summit
Mount Spurr is a lava dome that sits inside a caldera three miles wide. The original summit of the mountain was destroyed by a debris avalanche and pyroclastic flows.

Debris avalanche 15 miles long
Some of the blocks carried down the mountain in a debris avalanche were over 300 feet in diameter. They traveled over 15 miles away from the summit before being deposited at the base of the volcano.

Mount Spurr today
Today several lava domes sit in the caldera besides Mount Spurr.  Mount Spurr is the tallest of the peaks in the area. It is 11,070 feet above sea level. It is also the summit peak on the mountain.

Monitoring the mountain
The peak and its neighbors are constantly being monitored by geologists. They are a major threat to airliners if they suddenly erupted without warning and a jet plane flew through an ash cloud.

What are lava domes in calderas

Why are lava domes dangerous

Lava domes that form in calderas are slow growing and you could easily walk fast enough to escape when an eruption is happening.  The danger from lava domes is when they collapse after becoming unstable.  The gases and debris inside the dome create deadly pyroclastic flows that can travel at hurricane speeds away destroying everything in their path.