What is a Polar Front? 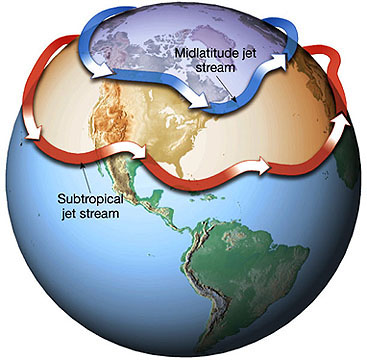 Map showing jet streams that are the boundaries between warm and cold air fronts. NASA

air flowing from the arctic

Northeast coast front
The stationary front off the United States northeast coast is between the land and the ocean. The sharp difference in temperature is caused by the snow covered land and the warm ocean currents flowing up from the equator.

Wave cyclones
Norwegians studying the weather during World War I came up with a theory that explained how wave cyclones originated in the middle latitudes instead of the tropics.

Middle latitude winds
These middle latitudes are areas where the air near the surface is constantly changes as air from the north and south come together. These regions usually have light winds and dry conditions.

Norwegian's wave theory
The Norwegians came up with the wave theory to explain cyclones that form along this front. A small bulge of warm air creates a "kink" in the stationary front. This leads to the winds twisting as the air masses meet and the Earth's rotation causes cyclones to form in this region instead of the tropics.