Watching pyroclastic flows traveling down the side of a volcano at hurricane speeds are awe inspiring sights. They occur during large volcanic eruptions when an eruption column partly collapses.

Large volcanic eruptions have eruption columns that blast superheated ash and rocks high into the atmosphere. If the eruption column collapses the superheated material turns into a pyroclastic flow that travels down the side of a volcano destroying everything in its path. 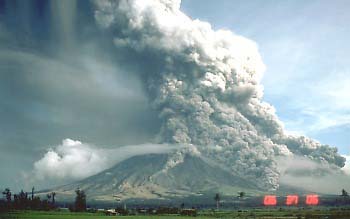 Pyroclastic flows of superheated ash, rock and other debris
flow down the side of a volcano at hurricane speeds, USGS

Formation and temperatures in pyroclastic flows

Formation of a pyroclastic flow
A ground-hugging avalanche of hot ash, pumice, and rock fragments forms when part of the eruption column collapses and begins flowing down the side of the mountain. The flow travels down the slope of the volcano at speeds up to 240 km/h (150 mph). They usually follow the contour of the land but will sometimes travel over a ridge into nearby valleys.

Temperatures in the flows
The temperature inside the flow of hot gases and rock can reach 815° C (1,500 ° F). These "stone winds" traveling at hurricane speeds kill or destroy everything in their path.

Pyroclastic flows traveling across water
Island volcanoes sometimes create these flows that travel across the surface of the ocean to nearby islands. During the eruption of Krakatoa in 1883 it is estimated that at least 10% of the deaths were due to falling tephra and ash flows. The superheated material traveled over 40 km (25 miles) across the Sunda Straits to the island of Sumatra in Indonesia