Redoubt is a Dangerous volcano 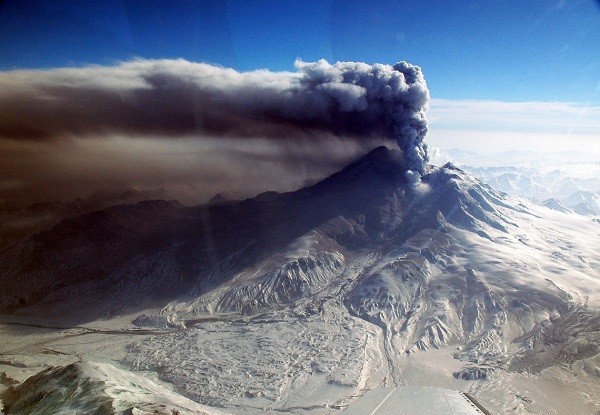 1989 eruption of Mt. Redoubt
The 1989 eruption of Mount Redoubt sent an ash cloud 45,000 feet into the air. A KLM airliner had all four engines fail as it flew through the ash cloud. The airplane was within a few thousand feet of the ground when pilots were able to restart the engines and avert a crash.

Million dollar damage to plane
The aircraft needed one million dollars in repairs before it could safely fly again. Meanwhile pyroclastic flows and lahars, volcanic mudflows, poured down the mountain into the Cook Inlet 22 miles away. No one was hurt during the eruption.

canceled flights out of Anchorage

March 15, 2009 eruption
Another eruption sent an ash cloud into the air 65,000 feet on the morning of March 15, 2009. A series of ash eruptions continued into the afternoon. Airlines were forced to cancel their flights out of Anchorage because of the danger from the drifting ash.

Crude oil tank farm threatened
Fears were also expressed about the possibility of pyroclastic flows and lahars destroying a tank farm that stores crude oil. The facility was spared but had to be shut down until the eruption ceased. Three major lahars occurred during the eruption and reached the Cook Inlet where the tank farms are located.

Lava dome near summit
Today a lava dome is growing near the summit of the volcano. The dome is perched on a steep slope of the volcano near the summit. It is the last of fourteen domes that formed during the 1989-1990 eruption. The dome could collapse at any time. The collapsing dome could trigger lahars that would travel down Drift Creek valley and into the Cook Inlet.