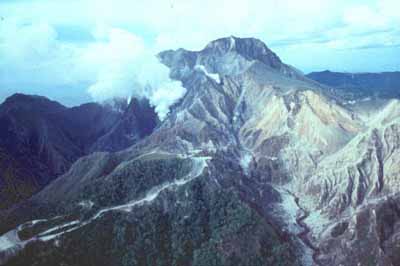 Mount Pinatubo on the Ring of Fire, USGS

Volcanoes due to Tectonic Plate movement

Aleutian arc
Alaska is home to more than 100 volcanoes along the 1,500 mile Aleutian Arc. The Aleutian Trench is the boundary between the Pacific Plate and the North American Plate. Major eruptions occur frequently along the Aleutian chain. Many times the islands are remote and only geologists know about the eruptions.

Air traffic dangers in Alaska
These eruptions pose a major threat to airline traffic that can inadvertently fly through an ash cloud causing their engines to shut down. Luckily there has not been a major airliner to crash because they flew through an ash cloud.