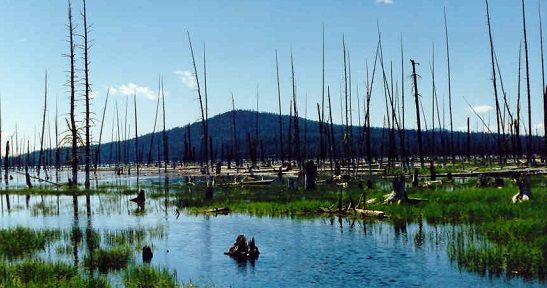 Small shield volcano in the Cascade Mountains of Oregon

Hawaiian Island volcanoes
The Hawaiian Islands are large shield volcanoes that dwarf continental volcanoes. Mauna Loa, on the island of Hawaii, is 375 times larger than Mount Hood in Oregon. These volcanoes characteristically have a broad summit with a caldera formed by collapse.

Formation of calderas
Flank eruptions produce calderas when magma drains out of shallow chambers beneath the summit of a shield volcano. Craters and pit craters are smaller than calderas and form when the summit collapses.

basalt lava from the upper mantle

Basalt lava
Shields are formed by layers of fluid basalt lava. Basalt lava which originated in the mantle contains ferromagnesian minerals. These minerals are magnesium and iron rich. Basalt lava flows form more than 99% of an Hawaiian Island volcano's mass above sea level.

Pahoehoe lava
Native Hawaiians first used the terms pahoehoe and aa to describe basalt lava flows on their islands. Pahoehoe flows are characterized by smooth, billowy or ropy surfaces. Many pahoehoe flows form lava tubes which help transport lava down the slope of a volcano before it cools.

Aa lava
Aa lava forms a rough surface that is difficult to walk across because of its sharp edges. Aa lava has the same composition as pahoehoe flows but is cooler and does not flow as fast as pahoehoe flows. Pahoehoe flows that cool on a volcano's flank can become an aa flow.