Beliefs in the 1940s about tectonic plate movement
Tectonic plate movement had been dismissed as impossible by geologists as late as the 1940s. Prior to this time scientists had argued that there was no way for the plates to move around the outer surface of the Earth and that the continents and ocean basins formed at the same time.

New ocean floor
Today we know that new ocean floor is created at spreading ridges and destroyed in subduction zones. Scientists have also confirmed that the continental crust is much older then the seafloors. 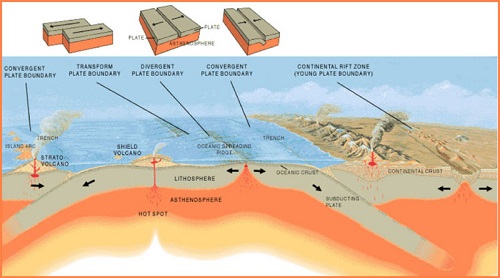 Rift valleys
The separating tectonic plates form a rift valley where weakness in the crust allows molten lava that formed in the upper mantle to flow out on ocean floors forming basalt rocks.

Fissures on the ocean floors
Fissures create cracks in the rocks as new magma moves beneath the recently erupted lava. The new lava breaks the rock layer apart and the two halves of the basalt rocks move in opposite directions as the tectonic plates separate.

Magnetite on the seafloor

Magnetite in basalt
Crystals in magnetite, a mineral in basalt, act like tiny compass needles lining up with Earth's magnetic field. Scientists use magnetite to study plate movement because Earth's polarity changes from north to south at irregular intervals creating a zebra like pattern on the ocean floors.

San Andreas Fault
The most famous transform boundary is the San Andreas Fault. It separates the North American Plate and the Pacific Plate that are slipping horizontally past each other along the fault line.