Destruction due to pyroclastic flows
The Vesuvius eruption of 79 AD was a massive eruption that sent ash over 20.5 miles into the air. Pyroclastic flows destroyed the towns of Pompeii and Herculaneum. Wealthy Romans lived and had vacation towns near the volcano. Pliny the younger, wrote about the eruption which is the first documented account of a volcanic eruption. 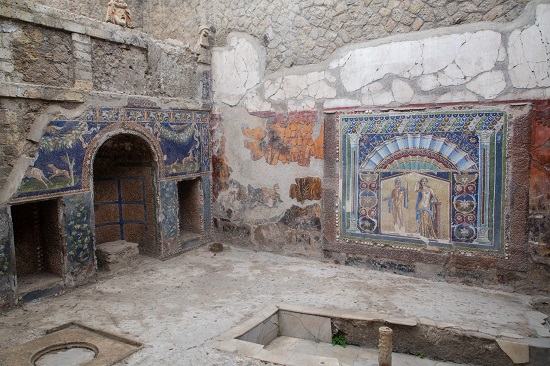 Pliny the younger records the eruption

Pliny the younger writes about the eruption
The Vesuvius eruption of 79 AD destroyed several prosperous Roman towns. They were in the path of its deadly pyroclastic flows that buried the towns. Pliny the Younger, a 17 year old Roman nobleman, witnessed the entire eruption.

Days of the eruption

79 AD eruption of Vesuvius
The eruption began with a column of black ash rising above Vesuvius. the ash cloud began to disperse outward at the top giving the appearance of an umbrella pine. The eruption continued for two days. The first day ash and pumice blew out of the volcano for up to 20 hours covering Pompeii with layers of pumice nine feet deep.

Day 2 of the eruption
The next day the eruption continued with pyroclastic flows traveling down the sides of the mountain at hurricane speeds. the hot gases, pumice and other debris in the flows killed all the people who remained in Pompeii and Herculaneum.

Pliny the Elder a Roman naval commander
Pliny's uncle also died trying to rescue people caught in the volcanic eruption. He was the Roman naval commander in charge of the fleet in the Bay of Naples. After the eruption the buried cities were forgotten for almost 1700 years when Pompeii was accidentally discovered.