Origins of the term supervolcano
The Three Sisters in the picture below was the subject of a debate in the early 20th Century.  A geologist suggested the Three Sisters and several other peaks were once a giant volcano that he named Mount Multnomah.

Byers, a geologist,  in 1949 reviewing a book about the Oregon volcanoes first used the term supervolcano when referring to Mount Multnomah. Geologists have determined that each of the mountains grouped together as Mount Multnomah are separate volcanoes and not one large volcano that was destroyed in a climactic eruption. 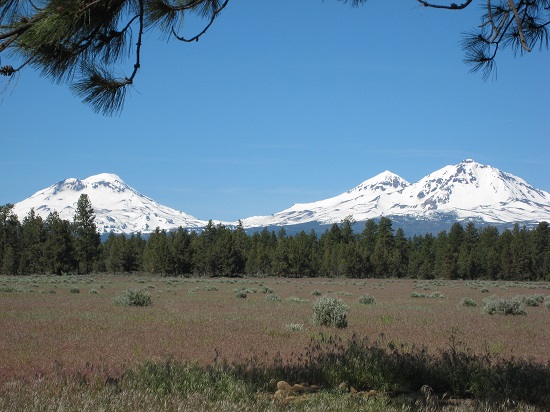 Stratovolcanoes
A volcanic chain of stratovolcanoes is created in subduction zone when a continental plate and an oceanic plate converge. The heavier oceanic plate bends and moves slowly into the mantle. The water soaked oceanic crust begins to melt as it descends beneath the ocean floor.

Molten rock above melting plates
The molten rock is hotter than surrounding rock in the lithosphere making it buoyant. Large plutons full of magma, molten rock, form above the melting plate. These plutons feed volcanoes on the continental side of the subduction zone.

Cascadia Subduction Zone
The Cascade Range is the result of the Juan de Fuca Plate subducting beneath he North American Plate. The Cascadia Subduction Zone that has formed between the two plates is approximately 700 miles long. The fault line runs from British Columbia in the north to the Mendocino Triangle in northern California.

Cascade Range volcanoes
Mount Rainier, Mount Saint Helens, Mount Hood, and Mount Shasta are four of the stratovolcanoes that make up the Cascade Range. The mountain that have formed parallel to the Cascadia Subduction Zone on the continental side of the subduction zone.

Aleutian Islands are an arc of volcanoes

Aleutian Arc
The Aleutian Arc is located in a subduction zone with the Aleutian Trench as the boundary line between the North American Plate and the Pacific Plate.