What are igneous rocks

The term igneous rocks is from the Greek word for fire. All volcano rocks are igneous rocks because they form from hot, molten rock that originated deep within the Earth at tectonic plate boundaries. 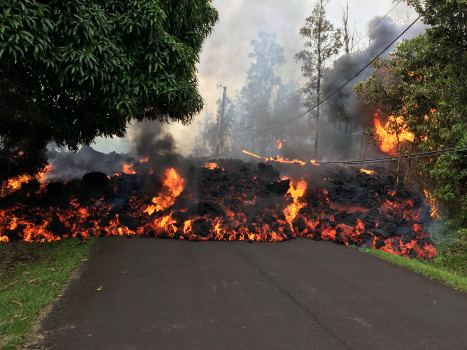 Basalt volcanic rocks forming during an eruption on Kilauea, USGS

Rhyolite rocks
Rhyolite magma cooling underground forms granite. Granite has large interlocking crystals that can be easily seen if you hold the rock at arm's length.

Supervolcano eruptions
Rhyolite is associated supervolcanoes and explosive volcanic eruptions that create calderas. During these violent eruptions the summit of the volcano collapses or is blown away during the eruption.

Basalt rocks
Basalt rocks are formed from dark heavy lava that forms in the upper mantle. Pillow basalt covers all the ocean floors. It forms when lava erupts on the ocean floor at spreading ridges where two crustal plates are separating.

Andesite rocks
Andesite lava forms in subduction zones where an oceanic plate is subducting beneath a continental plate. The lava erupts on the continental side of the subduction zone forming a large composite volcano. Composite volcanoes are also known as stratovolcanoes and they usually alternate between explosive eruptions and thick lava flows on the side of the volcanoes.

Examples of composite volcanoes
Mt. Hood, Mt. Rainier and Mt. Spurr. These great composite volcanoes usually have layers or tephra alternating with layers of thick lava flows. The lava was named for the Andes Mountains in South America.

Dacite rocks
Dacite contains less quartz than rhyolite lava and more than andesite lava. The lava when it flows out a a volcano vent is so "sticky" that it piles on top of a volcano's vent forming a dome.

Lava domes
Lava domes often form in the craters of stratovolcanoes like Mount Saint Helens. Lassen Peak in California is an example of the summit of a volcano that is dacite.

Groups of dacite domes
Small dacite domes form in groups. The exterior of a dacite dome is crumbly because the lava is so thick it breaks the outside layer of rocks apart as new lava pushes upward from the vent of the volcano.